While that's a large reduction from earlier figures projecting a $1.8 billion shortfall, it remains a substantial hole in the budget. For some perspective, it would take a residential property tax increase of more than 20% to fill the gap. The City is looking to the federal and provincial government to step up with the funds this year. If senior orders of government don't come through with the funding, the City will dramatically reduce its capital budget for infrastructure, affecting many budgets, particularly public transit and transportation.

Changes to the Budget through the City's Budget Process

After the staff-recommended (draft) budget was launched on January 14, the Budget Committee reviewed the budget, heard from members of the public about their priorities for the city, and voted on motions that proposed funding increases in several areas. Councillor Layton put forward motions at Budget Committee to increase funding for climate action, affordable housing, the Housing Commissioner, winter washrooms, and ravines. All motions failed. Following the Budget Committee's review, the budget remained substantively unchanged from the staff-recommended version launched on January 14.

Next, the Mayor's Executive Committee reviewed the budget. The Executive Committee added $8 million in funding for programs and services, paid through a special dividend from the Toronto Parking Authority. The $8 million added will support youth employment ($3 million, Social Development, Finance and Administration), TO Supports Investment Fund ($2 million; for nonprofits and community orgs to provide mental health supports with funding through Social Development, Finance and Administration), accelerate expansion of internet access for low income and underserved communities ($2 million, Technology Services), and support for local business ($1 million, Economic Development and Culture for campaign to shop local, dine out, etc. when the pandemic subsides). See motions below.

Today, February 18, Toronto City Council held final votes on the 2021 budget. Council voted to add $4 million to the Social Development, Finance and Administration budget, to be used if needed, and any remaining funds be applied to capital reserves. Councillor Crawford moved this motion to provide the division with additional funding to carry out its work. If the division would like to allocate the funds, staff will come forward to Council for a motion approving the allocation. The funds came from a special dividend from the Toronto Parking Authority. Later in the meeting, Councillor Wong-Tam moved a motion which passed to use $2.47 million of the $4 million to help out taxi drivers.

In total, the Executive Committee and Council added $12 million to the budget from this funding source. Most pre-COVID budgets added more funding to programs and services through the budget process, but not so today. Members of Council and City staff noted that while this is the first COVID budget, the impact of the pandemic on City finances will continue for several years to come. This year's budget had a low level of new investment in the City's Poverty Reduction Strategy and in new and enhanced services.

The final budget includes a shortfall of $649 million that requires federal and provincial funding. In addition, the City requires $15.6 million for supportive housing from the provincial government and $61 million for supports for refugees from the federal government. If the City does not receive the funds to cover the shortfall and these additional programs and services, Council will have to decide how to proceed. Its 'Plan B' is to reduce the capital budget which would have an enormous impact on infrastructure. There's also a great deal riding on whether the Province provides the funds for supportive housing. Twelve hundred units of supportive housing are in jeopardy. Read more here and here. We can't lose those new units of supportive housing. They are desperately needed and have a significant impact on capacity within the shelter system. 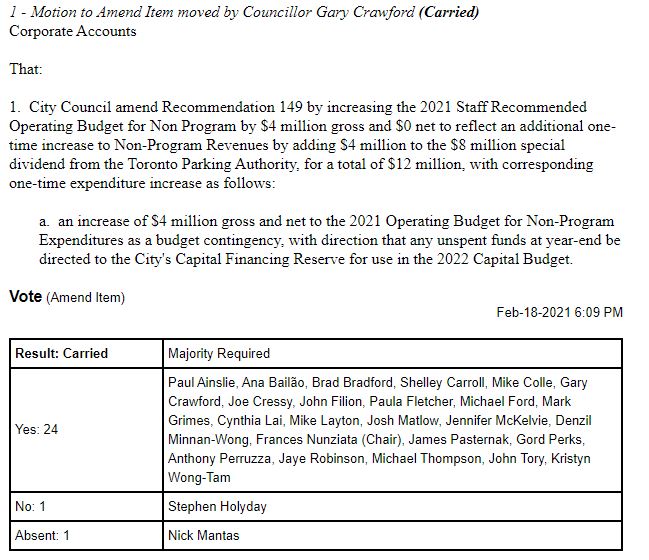 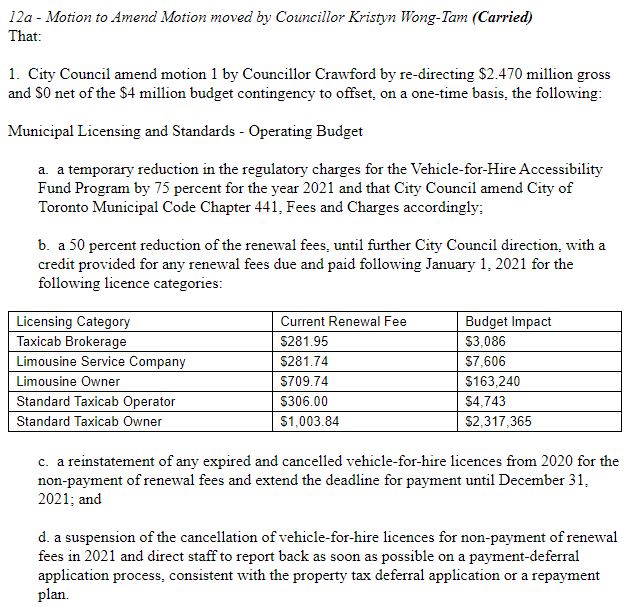 Select policy and other motions (i.e. motions that don't add funding to the 2021 City budget) (Carried)

Councillor Carroll's motion (carried) speaks to the need for City Council to address its longstanding revenue problem, the funding problems resulting from the pandemic, and the need to ensure long-term financial sustainability. Throughout the budget process, Councillor Carroll has voiced concerns about the City's future financial situation, once senior orders of government are no longer providing pandemic relief or stimulus funding and cities are left to deal with the financial fallout. Her motion carried. 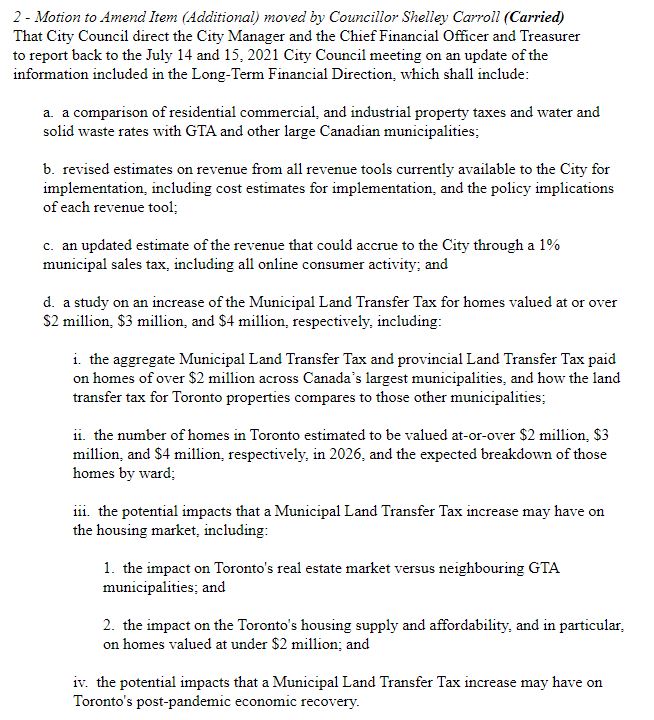 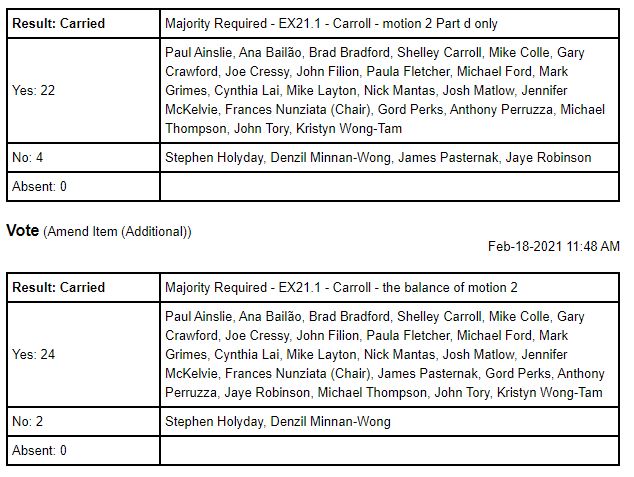 Some motions calling for reports and information on the policing budget, community crisis response, and community safety carried. 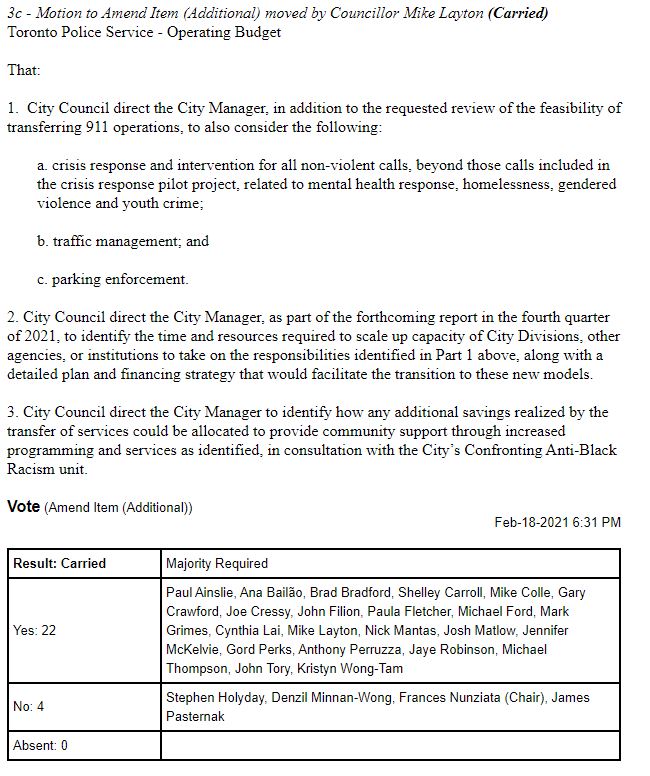 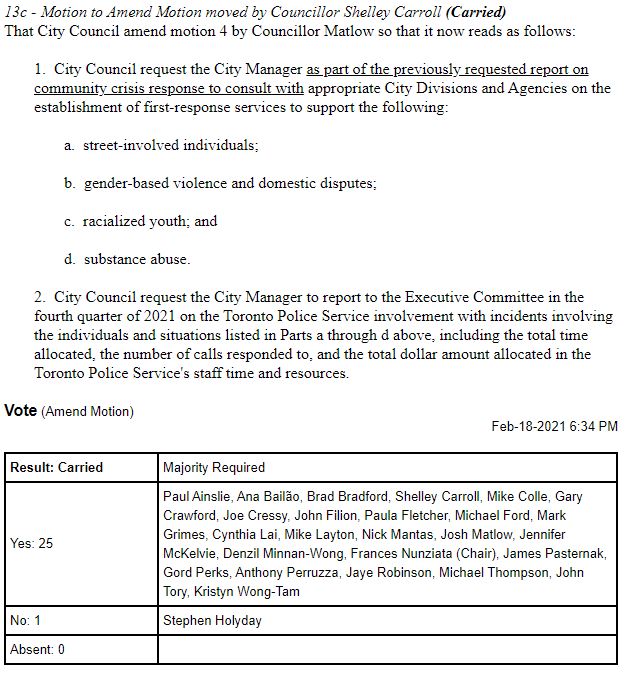 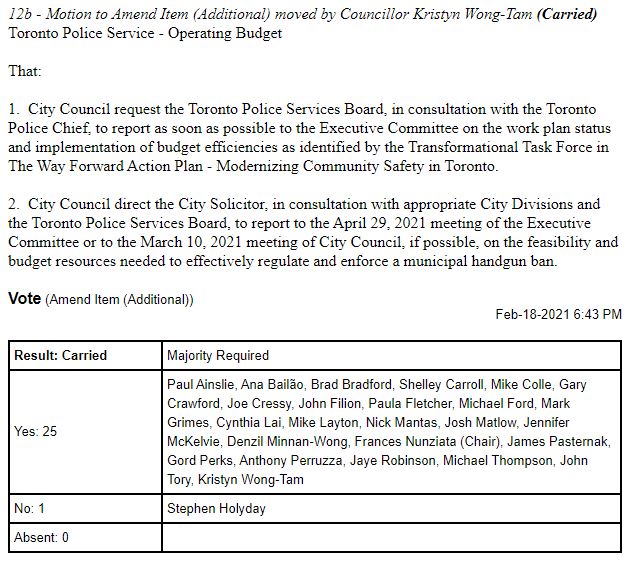 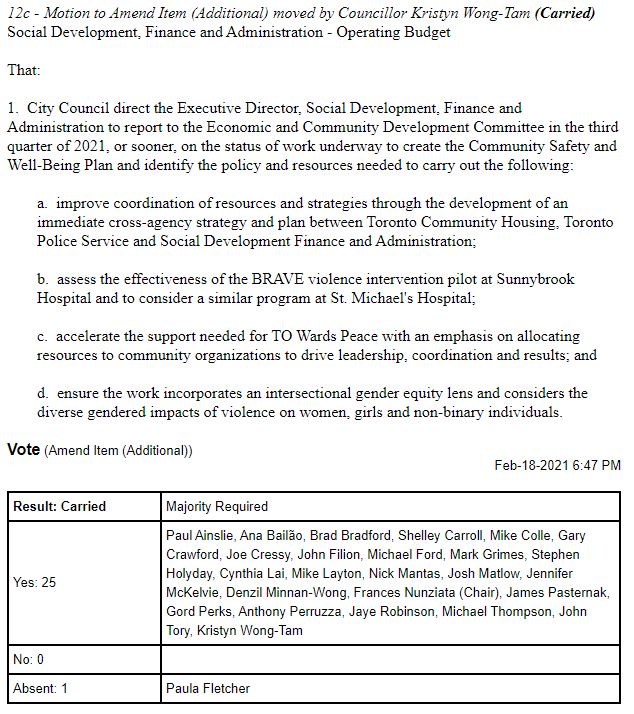 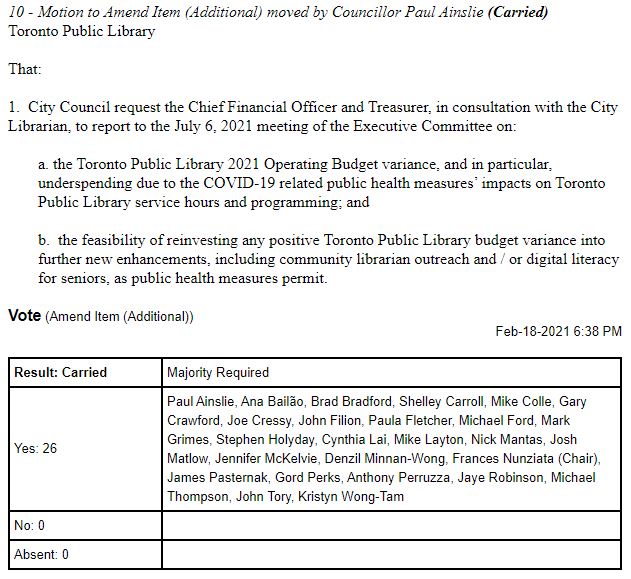 Councillor Carroll's motion requests funds from the federal and provincial government to pay for digital literacy for seniors and community librarians outreach programs, as part of the City's request for pandemic funding. 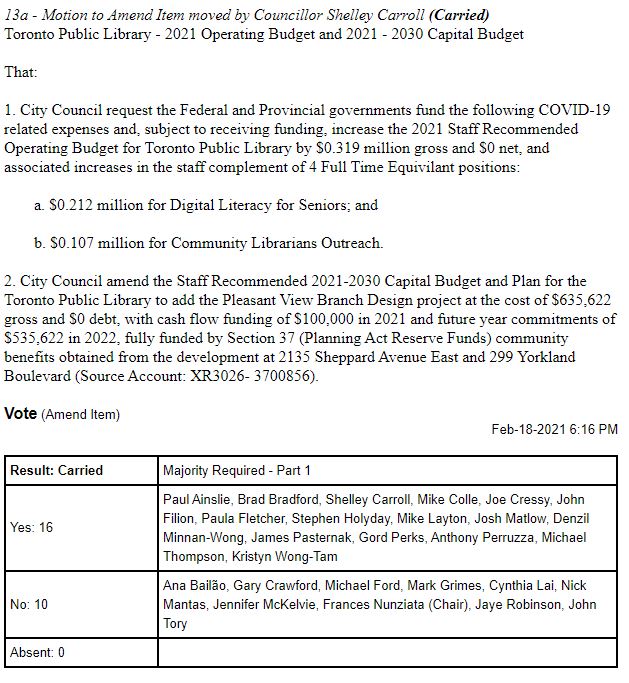 Councillor Perks' motion (lost) demonstrates the disconnect between Council's decisions about property tax rates and various social objectives such as achieving universal access to licensed, affordable quality child care, ending homelessness, and ensuring the City can meet transit capital needs. The rates are set first, and then Council considers programs and services once the property tax rates are locked in. We have advocated to start with City goals, then consider funding options to meet these objectives. For many years, low property taxes have been the first priority. 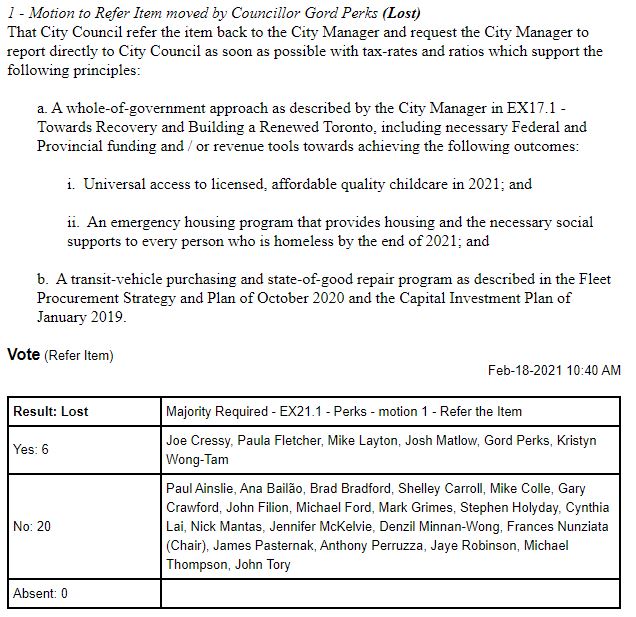 Councillor Wong-Tam moved a motion to get the Housing Commissioner role and function up and running faster. Her motion lost. 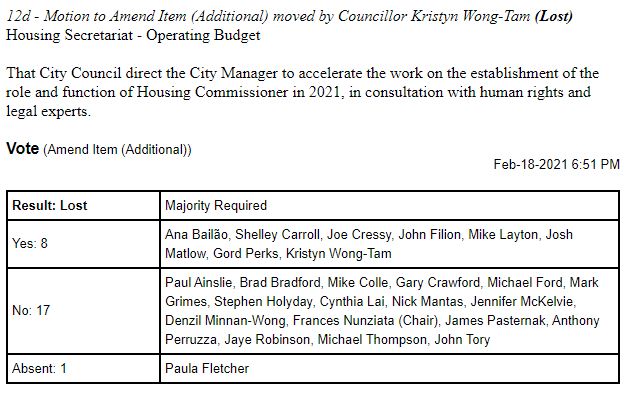 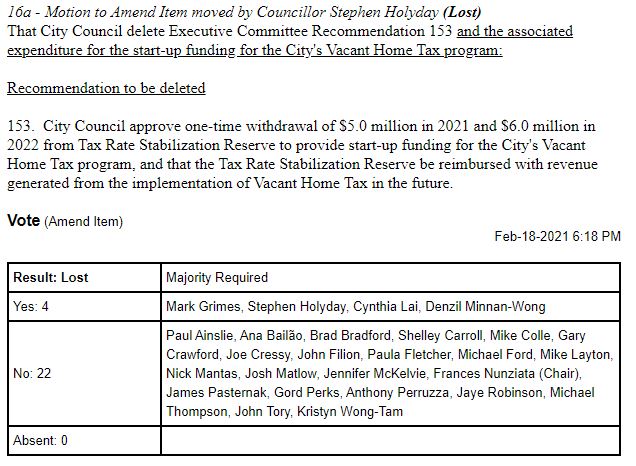 Motions to increase funding for climate action and housing (Lost)

Recreation user fees are set to increase by an average of 2.06% in 2021. Councillor Layton attempted to cancel the recreation user fee hike by making a tiny increase (0.0114%) to the residential property tax rate - an increase that would have cost the average homeowner about 36 cents. No dice. A majority of the committee voted to maintain the residential property tax increase at 0.7%.  As a result, the following motion was considered redundant and not voted on. 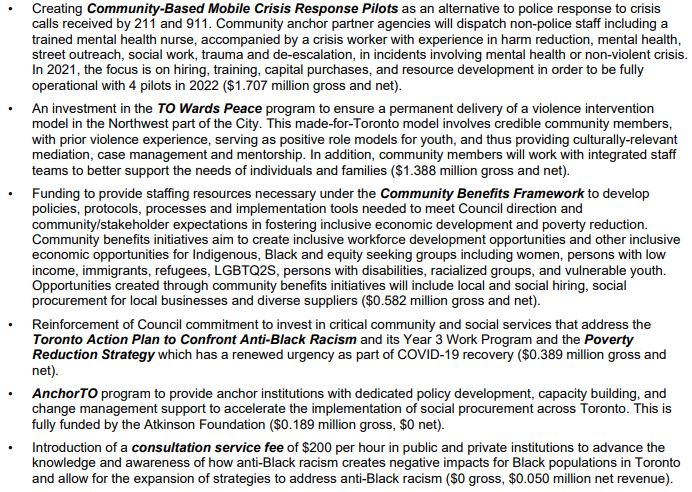 Although the budget process is over, the time for action is not! Sign on to:

That's a wrap for the 2021 City of Toronto budget.