On February 17, Toronto City Council passed the 2022 City budget, making only minor changes to the original staff-recommended budget launched one month ago. Despite thousands of residents calling for a better bolder budget that would respond to the multiple and mounting crises impacting communities, Toronto City Council opted for a status quo budget that failed to meet the moment.

After a month of deliberations, Council largely ended up where it started, adding just $3 million to the staff-recommended budget launched on January 13. During the budget process, the Chief Financial Officer reported that the City is expected to achieve $3 million in savings through its procurement process, savings not reflected in the staff-recommended budget which could be used to fund new and enhanced services.

The Budget and Executive Committees made no changes to the staff-recommended budget. City Council used the $3 million in savings to increase funding for select services. The additional $3 million represents a 0.023% increase to the City's $13.03 billion tax-supported operating budget. If the City had a $1 million budget, it would be the equivalent of adding $230 to it.

During the Council meeting, Councillor Perks remarked, "The budget we have in front of us, just as every budget we have ever had, is a matter of choices, and I choose differently than the budget that was  presented to Council by the Executive Committee. Specifically, I think it is more important to give the police 99% of what they asked for and to house an additional 1,000 people, than it is to give the police 100% of what they asked for." Both motions failed. Councillors Perks, Cressy, Fletcher, Layton, Matlow and Wong-Tam voted in favour of the motions. If these motions had passed, they would not have resulted in a decrease to the police budget but rather a smaller increase to the police budget.

The City of Toronto has long had a revenue problem - one where its revenues and revenue sources are insufficient to resource its plans and strategies and meet its goals and commitments. Too often, City Council has avoided the issue and failed to adopt strategies to increase revenues to pay for critical programs, services and infrastructure.

During the discussion on 2022 property tax rates, Councillor Layton moved Motion 1 (shown below), directing senior finance staff to provide an update on the long-term financial plan as part of the 2023 City budget process (which is expected to begin in January 2023). This update will provide an important opportunity for the new Council to tackle this important issue and for residents and groups to advocate for strategies and options to pay for a more livable, equitable and sustainable city. Council voted in favour of the motion.

Prioritizing Low Property Taxes Above All Else

The Council meeting started off with Councillor Perks asking Mayor Tory if he would consider combining EX30.1 the property tax rates and EX30.2 the operating and capital budgets together as one item. The Mayor declined to do so.

City Council passes the budget by first setting the property tax rate and then moving on to decide which programs, services and capital projects to include in the operating budget and capital plan. If members of Council want to add or expand a program or service, they are required to identify a revenue source to pay for it. But once the tax rate is set, as the first item on the agenda, property taxes are taken off the table as a possible source to fund even the smallest of new or enhanced programs introduced at Council. This approach prioritizes maintaining low property taxes over all other concerns. It wasn't always done this way and the future Mayor in the new term of Council could decide to do things differently.

Council voted in favour of a residential property tax increase of 2.9% (at inflation), with an additional 1.5% increase for the City Building Fund which supports the capital budgets for public transit and affordable housing. For an average home assessed at $697,185, the 4.4% increase amounts to $141, an extra $2.71 a week, for a total 2022 property tax bill of $3,339, not including education taxes. As of 2020, based on comparisons provided by City finance staff during the 2021 City budget process, Toronto's average residential property taxes remained one of the lowest among municipalities in the GTHA and Ottawa. (See page 55 in the presentation.)

How Did Your City Councillor Vote?

Find all motions on the 2022 Operating and Capital Budgets here.

a. Motions that Passed

Two motions passed that allocated the $3 million in newly identified savings from the City's procurement process: Motion 1b and Motion 3, amended by Motion 16.

Mayor Tory's Motion 1b allocated $2.885 million of the $3 million to select programs and services. 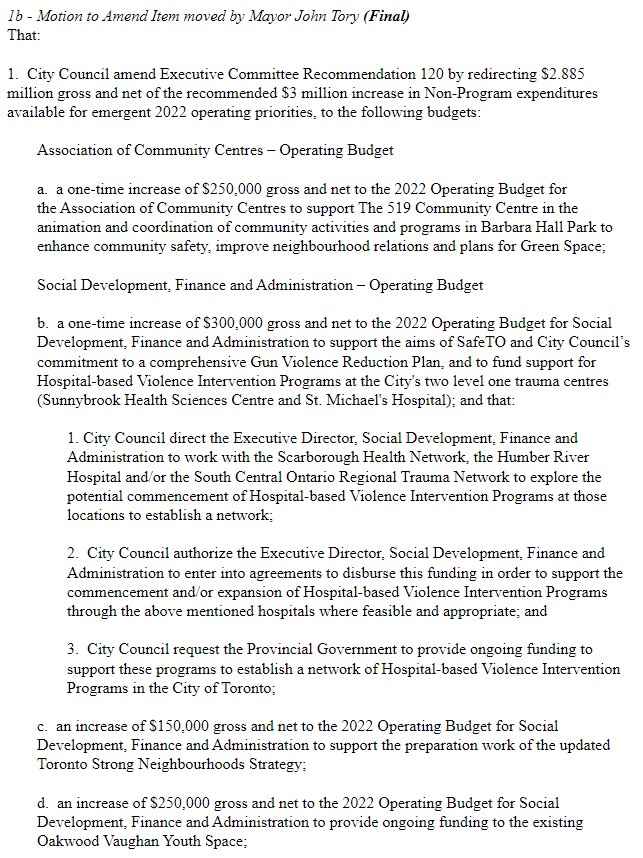 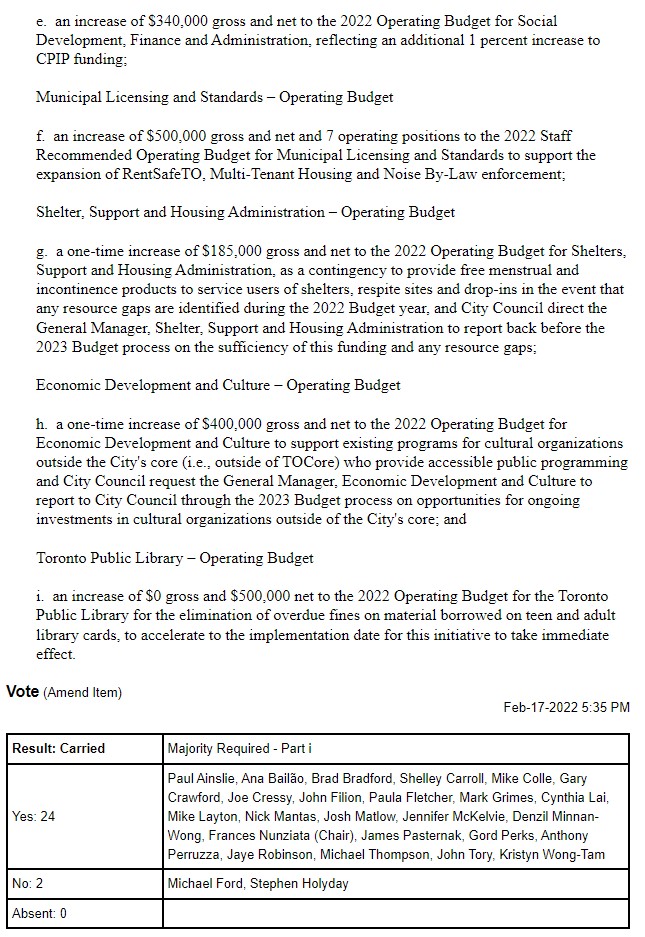 Councillor Matlow's Motion 3 to fund the Digital Literacy for Seniors program was amended by Councillor Ainsley's Motion 16. The end result was that $115,000 was allocated from the $3 million to get the program started in September 2022. 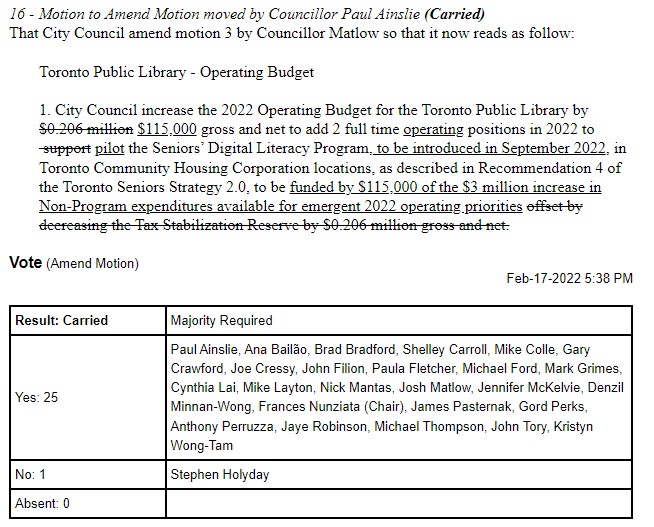 City Council voted on the 2022 tax-supported operating and capital budget (as amended by the motions above).

b. Motions that Failed

Councillor Perks' Motions 6a and 6b to reallocate funds from the police budget to support housing initiatives and Motion 6c to increase the capital budget to advance Vision Zero, Complete Streets, and the Climate Action Plan were not successful. 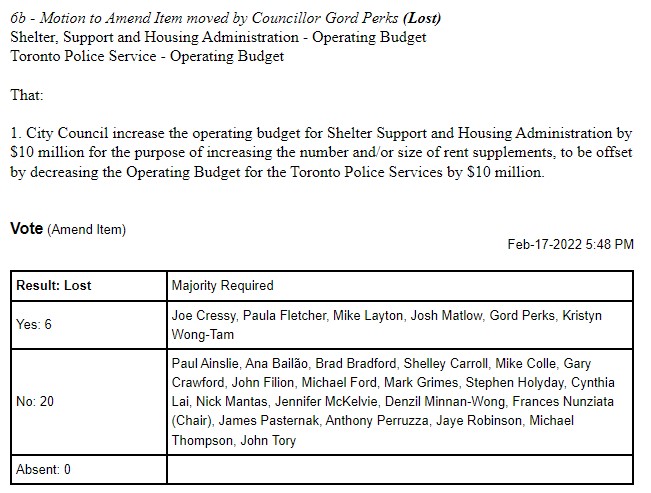 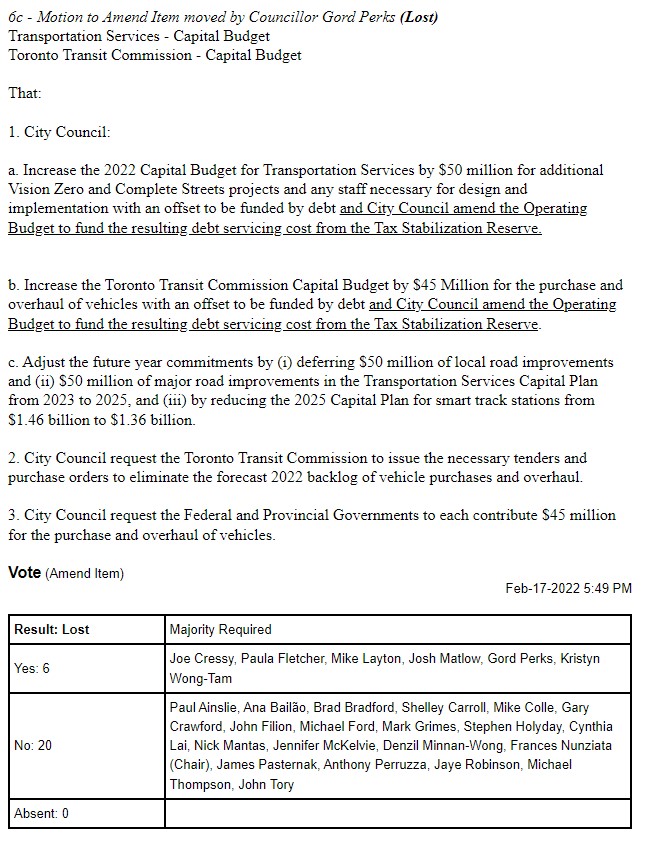 Councillor Wong-Tam's Motion 14a to increase funding for the Downtown East Action Plan and Motion 14e to eliminate late fees and interest charges for 50 properties were not successful. 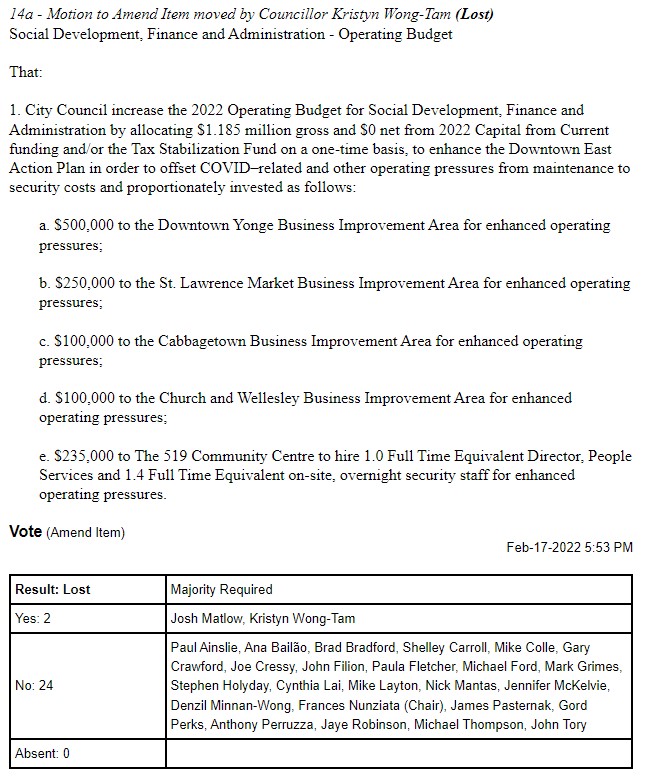 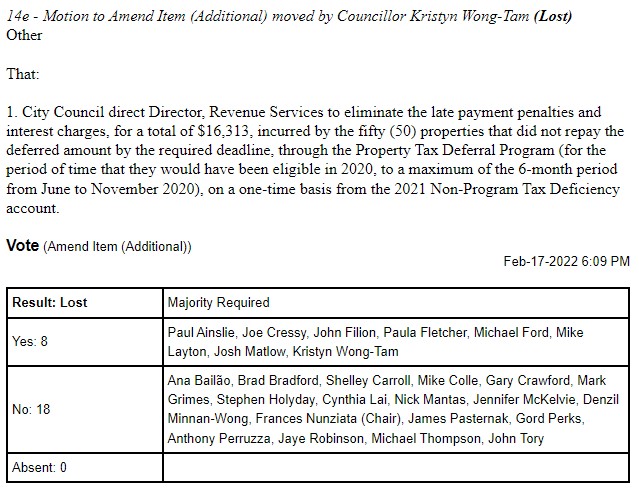 2. Motions that Direct Staff to Produce Reports or Take Other Actions (non-financial motions)

a. Motions that Passed

Councillor Layton's Motion 1, EX30.1 (Property Tax Rates and Related Matters), directs staff to produce an updated Long-term Fiscal plan at the beginning of the next term of Council. There was no recorded vote on this motion.

According to Briefing Note #27, the Shelter, Support & Housing Administration identified ways to "expedite up to 300 additional housing opportunities for people experiencing homelessness in the shelter system for immediate implementation over the next 6-12 weeks through three approaches: Increased partnership with TCHC through the Rapid Rehousing program (100 homes), Creating new partnership to expand Supportive Housing units (150 homes); Expanding access to Rent Supplement units (50 homes)." 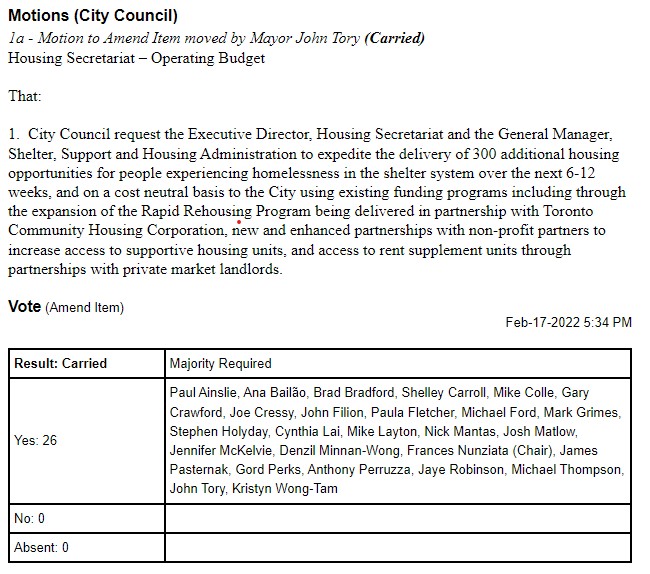 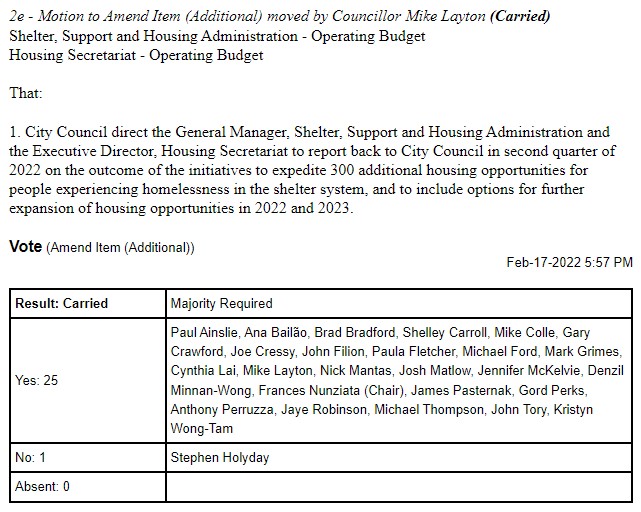 Councillor Layton's Motion 2a, 2b and 2c pertain to childcare, the RentSafeTO program, and the Fair Pass program, respectively. 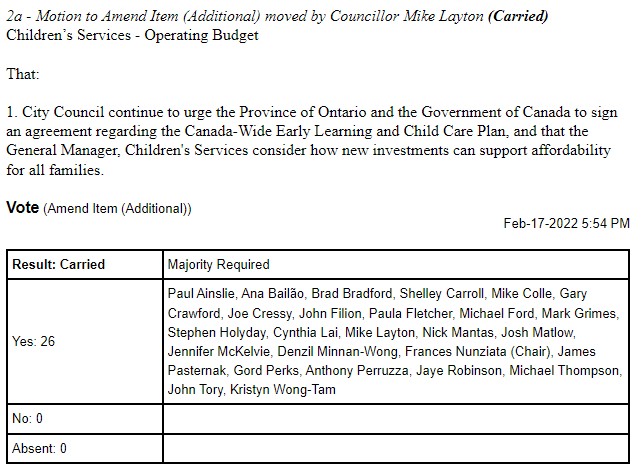 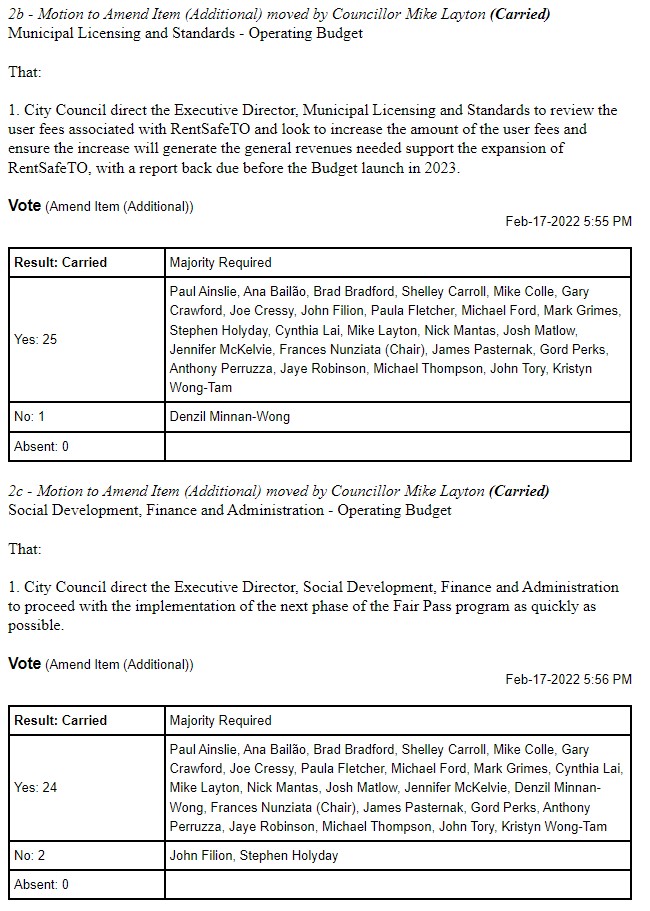 Councillor Fletcher's Motion 12a directs staff to conduct a review of the City's Property Tax, Water and Solid Waste Relief Programs to identify any barriers to participation. These programs support homeowners who are low-income seniors and low-income individuals with disabilities. Her Motion 12b pertains to revenues from permit parking. 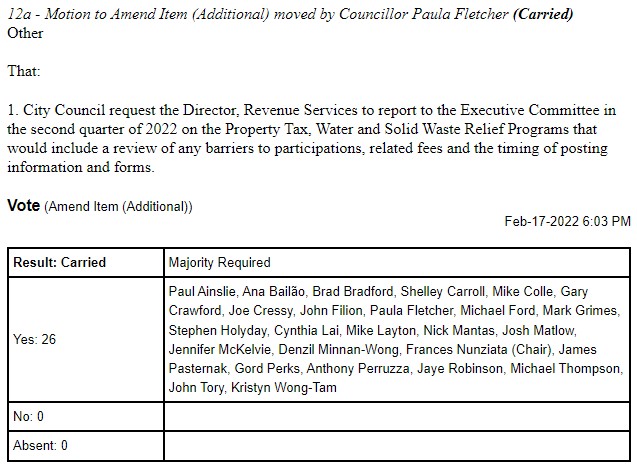 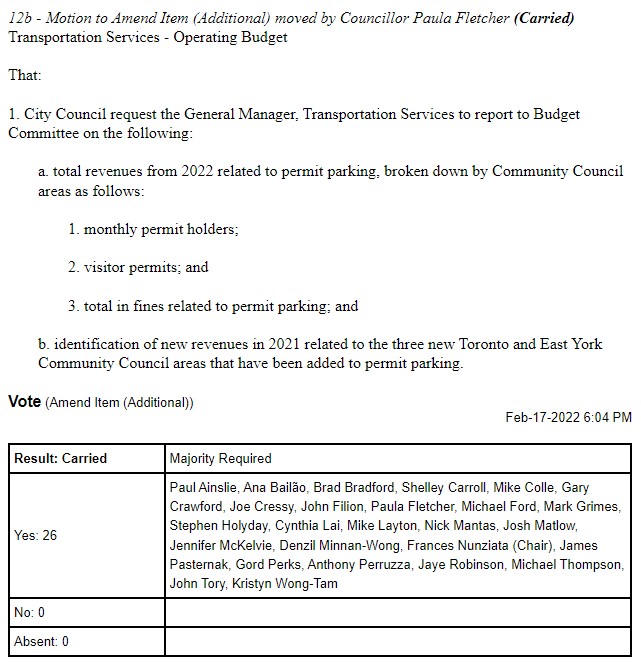 Councillor Wong-Tam's Motion 14d pertains to food security in the Downtown East and West. Her Motion 14g pertains to the potential for affordable housing in her ward. 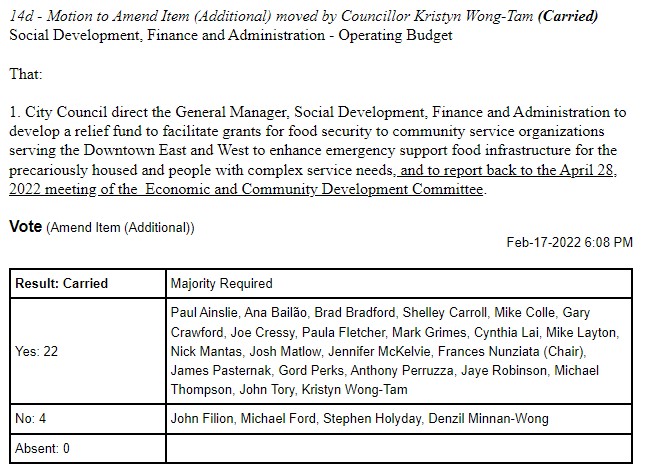 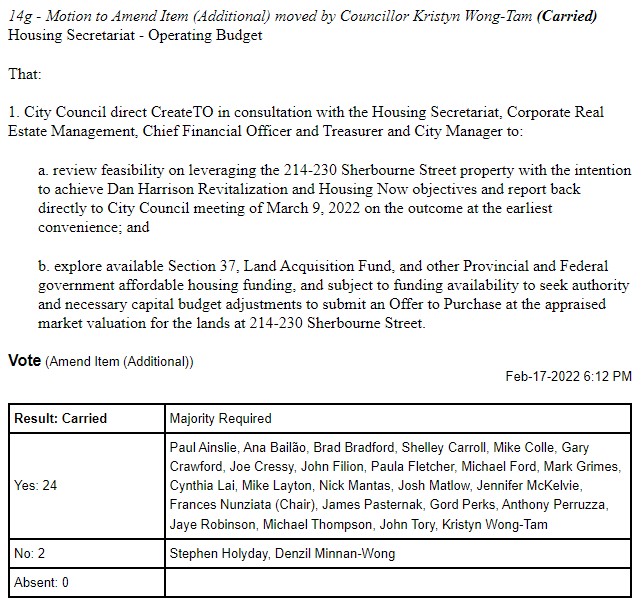 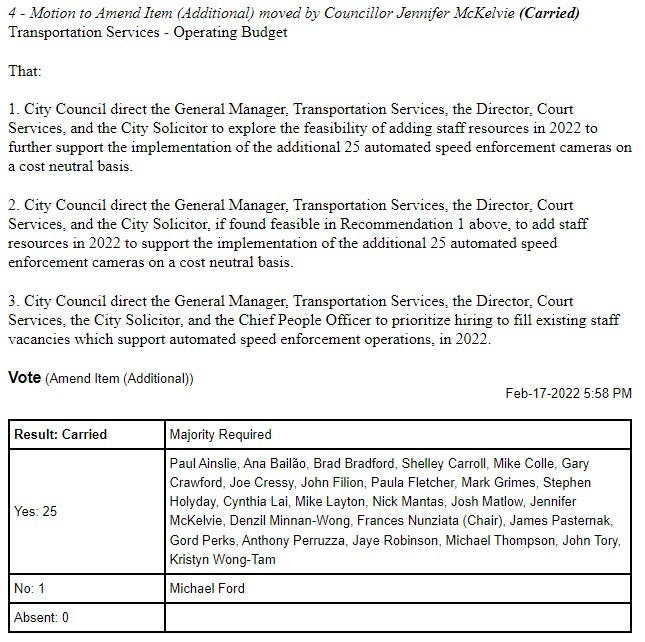 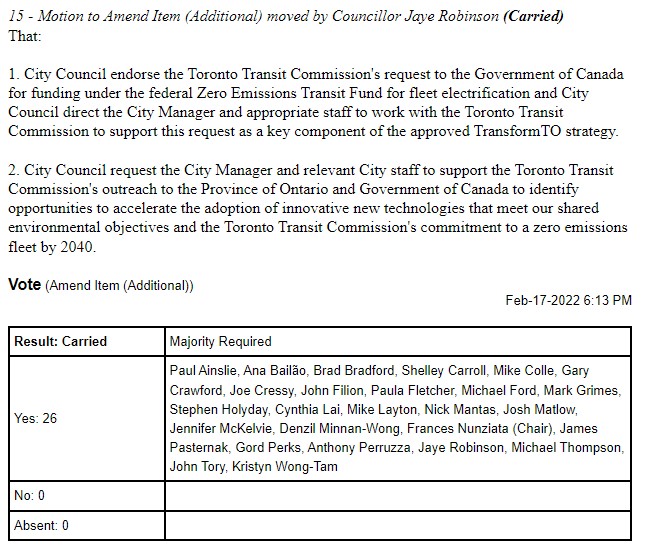 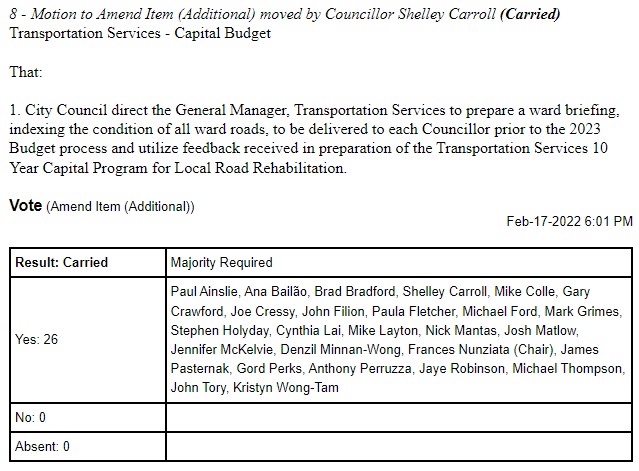 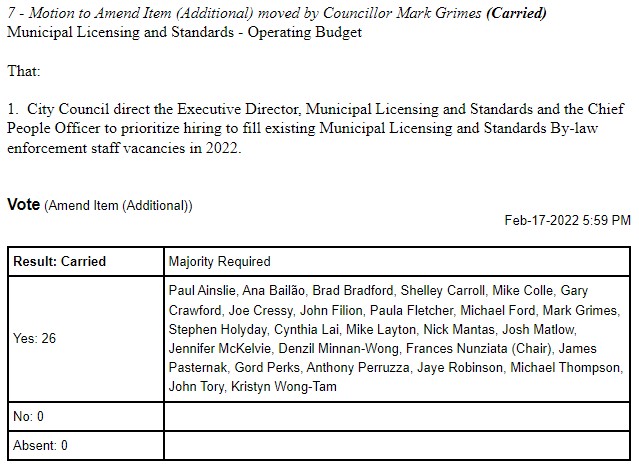 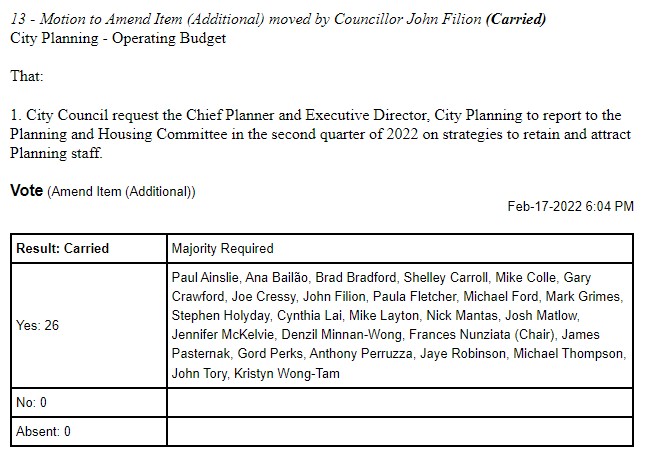 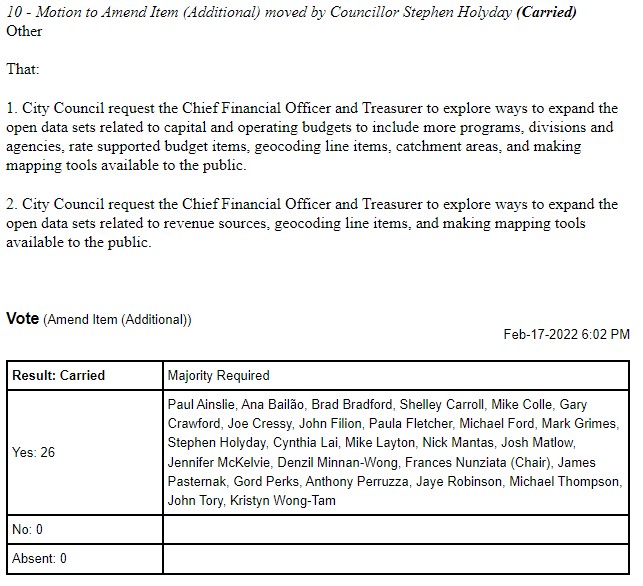 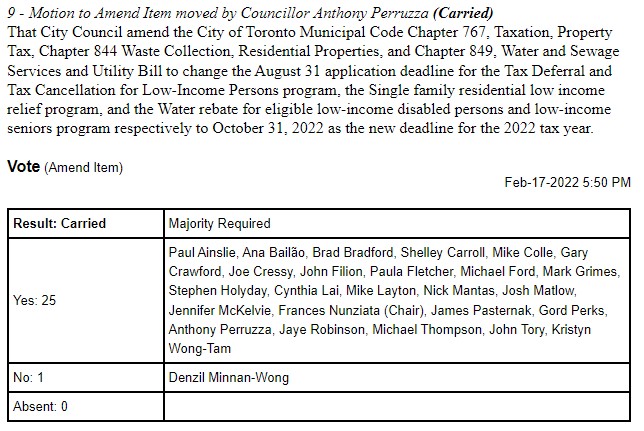 b. Motions that Failed

Councillor Wong-Tam's Motion 14f (part 2) requesting the police board to consider phasing out the mounted unit was not successful.