We are diligently digging into the City’s budget documents. Today, we’ve got a first look at:

The table below shows the level of investment in 2023 in new and enhanced services to advance the PRS. At just under $4 million (including just over $3 million from City revenues), it is one of the lowest levels of new investment since the launch of the strategy in 2016. At a time of heightened crisis for low-income residents in Toronto — struggling with the high cost of living, rising rents, homelessness, and food inflation — the 2023 City of Toronto budget fails spectacularly to deliver meaningful change on this front.

Instead the City has chosen to prioritize the police budget (increasing it to $48 million) in the name of “community safety.” 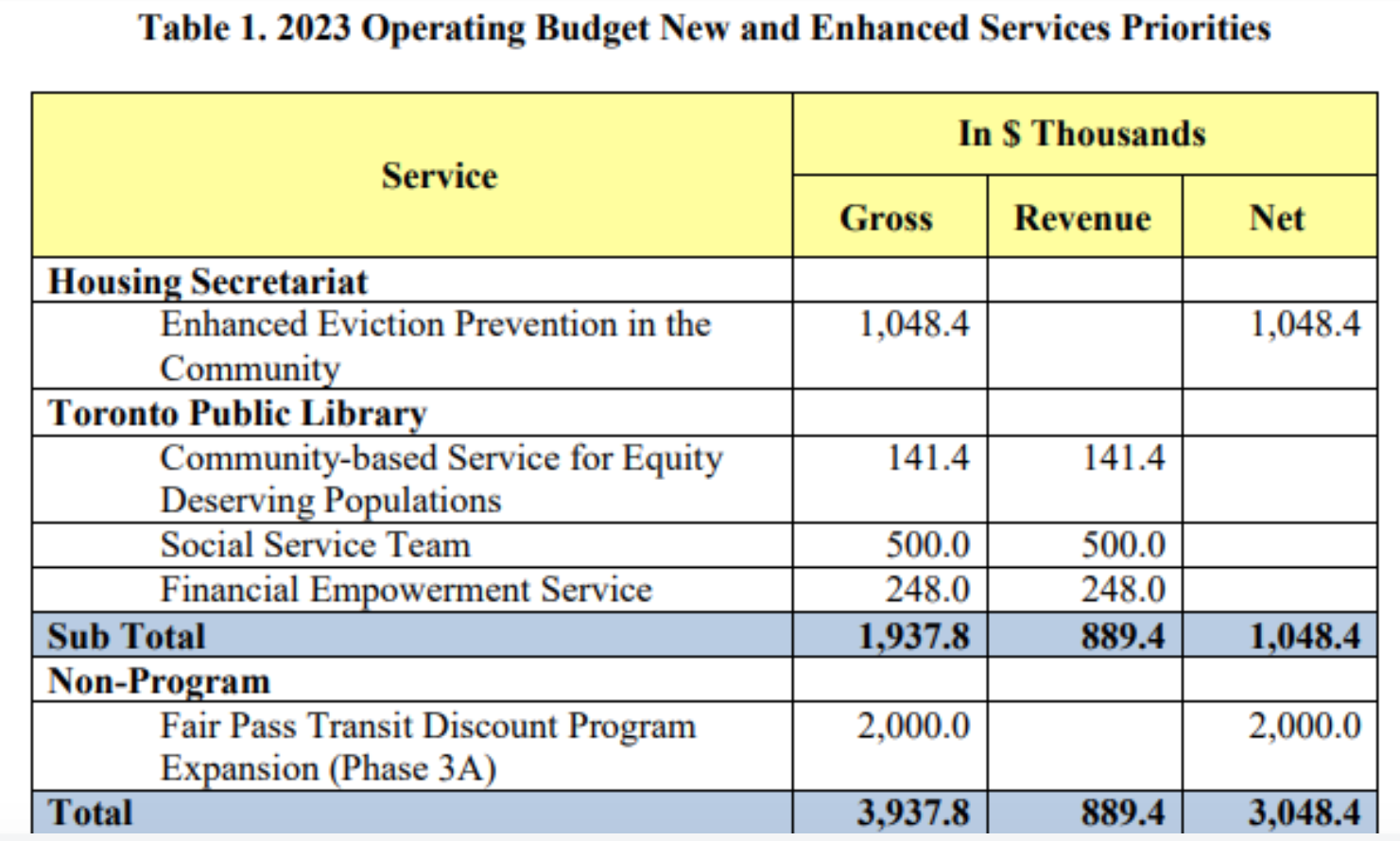 Housing Secretariat: An increase of $1 million to expand the Eviction Prevention in the Community (EPIC) program. The EPIC program was budgeted in 2022 to assist 600 households in maintaining their homes to prevent eviction and homelessness. The total number assisted was actually higher at 681 households. With the budget increase, it will assist an estimated 1,200 households, doubling the impact of the program.

There is a great need for eviction prevention programs, well beyond the capacity of the EPIC program. In 2018, over 20,500 formal applications for eviction were filed within the City of Toronto. This number has likely increased with growing numbers of families and individuals struggling to get by. Far more is needed to address the city’s affordable housing and homelessness crisis.

Non-Program: Fair Pass Transit Discount Pass Program Expansion. The budget includes an additional $2 million for what the City is calling Phase “3A” of the program. Phase 3 expands eligibility for the program beyond those receiving income assistance (Ontario Works, Ontario Disability Support Program, and Child Care Fee Subsidy recipients, and Rent-Geared-to-Income tenants). In Phase 3A, low-income residents in deep poverty (with an income of 75% of the LIM-AT (low-income measure after tax) who are not already included in the plan will have access.

Although this expansion makes an additional 50,000 low-income residents now eligible, the budget increase is based on an uptake of only 30% (8,000–12,000 people in 2023 with implementation in June, rising to 15,000 in 2024). Not everyone eligible uses the program — some because they still cannot afford transit and require a deeper subsidy.

The City is behind in implementing the plan and should take efforts to expedite implementation of Phase 3. The City has mentioned the possibility of a phase 4 to increase the discount and should plan for that in the year ahead as well.

Community-based nonprofit agencies, including nonprofits supported by the City’s Community Partnership and Investment Program (CPIP), play a critical role in supporting people living in poverty. The City provides annual funding of $25 million to support the delivery of community services by nonprofit organizations across the city.

For several years, the City has included a cost-of-living increase in the community grants funding, recognizing the impact of inflation on the cost of delivering community services. City staff have indicated that the 2023 budget does not include an inflationary increase for CPIP and that it would cost $1.2 million to provide one (we understand this is based on a 4.7% increase, the same factor used to increase user fees; to increase CPIP funding by the Toronto rate of inflation of 6.6%, it would cost about $1.7 million).

The funding freeze represents a funding cut for community service organizations and under-served communities at a time when service demand is high and costs are steeply rising (see our recent Op-Ed, “A sector pushed to its limits — why Toronto needs the mayor and city council to invest in the community services sector”). Nonprofits can’t afford to cover this funding cut.

A budget freeze (cut) when the sector can least handle it

The budget freeze for nonprofits is especially detrimental to a sector that has been struggling with an ongoing human resources challenge. Due to a lack of adequate, consistent, and reliable funding, the nonprofit sector has long struggled to provide good full-time, permanent jobs with competitive wages and benefits.

The pandemic has placed incredible demand for services on nonprofits, and there’s no sign of it slowing down — almost three-quarters of nonprofits are reporting continued increased demand. Staff burnout and stress, skills shortages, and wage disparity between our sector and others have created an unprecedented human resources crisis for our sector. We are struggling to recruit and retain staff.

The child care sector, for example, is facing a workforce crisis only worsened by the pandemic. The increasing expectations and responsibilities of under-valued frontline care work, coupled with the precariousness of their positions (underpaid Early Childhood Educators often have a second or third job to make ends meet) is causing increasingly high rates of burnout among ECEs. Many leave the sector completely within three years of graduation.

At a time of increasing demands for services — not least due to the COVID-19 pandemic — now is the time for the City to increase its support for the sector, not make cuts.

The Budget Committee meets January 12 and 13 to review the budget. We’ll have updates to share from these two days of budget review, including at our Budget Town Hall on Monday. 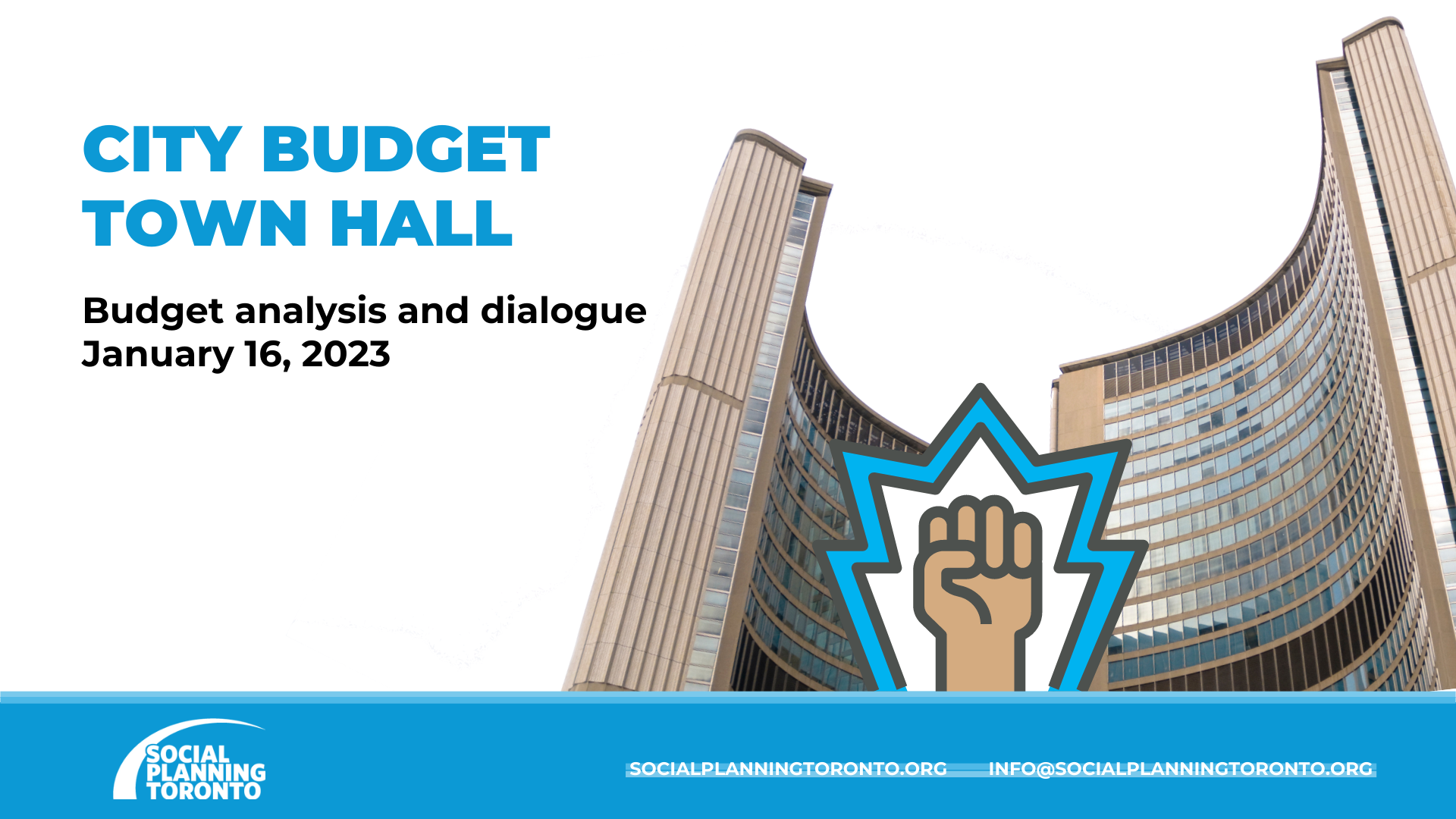 Then it’s deputations, your chance to have your say — either in person or virtually — on January 17 and 18. You must register to speak by 4:30 p.m. on Monday, January 16, indicating which day and time slot (morning, afternoon, or evening) you prefer. For more on deputations, see this previous blog post.

All meetings will stream live on the Toronto City Council YouTube channel.

Photo by Aaron Doucett on Unsplash