One day before City Council debates and votes on its 2017 Budget, prominent Toronto faith leaders helped stage a mock homeless shelter at City Hall, and called for the City to act on the shelter and housing crisis.

Volunteers helped serve soup to City Hall staffers and Councillors while shelter beds were set up on the floor of City Hall’s rotunda. 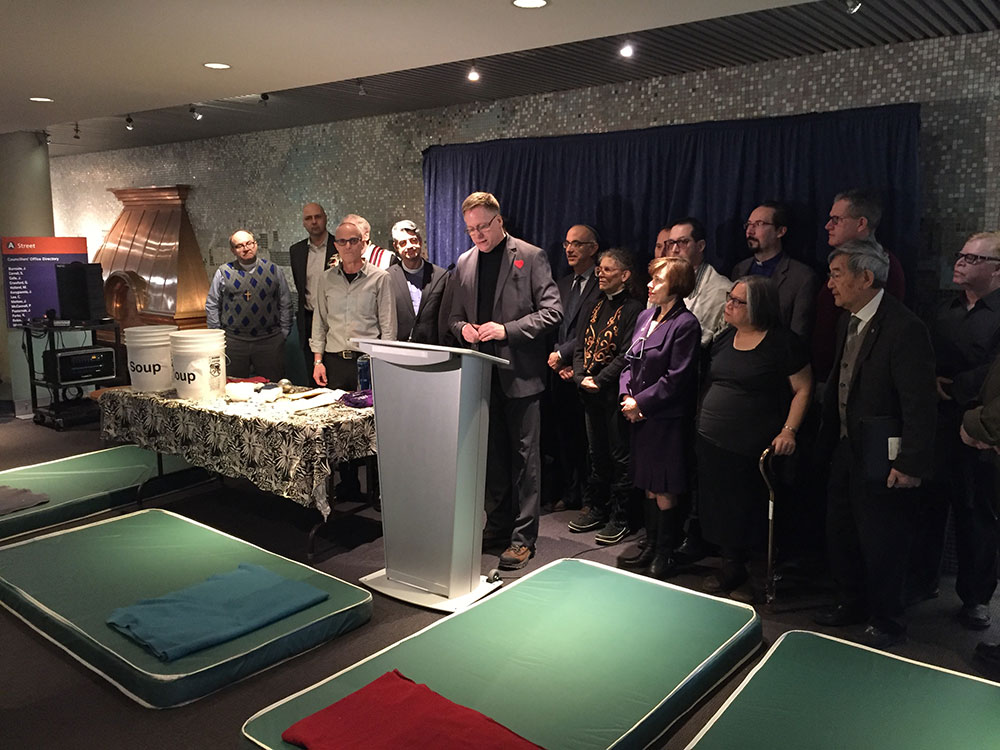 “Within two weeks of opening we began operating our shelter as if in a Cold Weather Alert to accommodate all those in need of a bed”, said Rafi Aaron, Co-chair of the Beth Sholom/Beth Tzedec ‘Out of the Cold Shelter’ and spokesperson for the newly formed, Interfaith Coalition to Fight Homelessness. “Shelter and foodbank users are more and more resembling of our family members, friends and neighbours. They are using our shelters for longer periods, and struggle to find long term, affordable housing options”.

“Our churches, synagogues and mosques are often the hosts of shelter programs. As faith leaders, we represent communities on the front-line of the housing and shelter crisis”, said Joe Abbey-Colborne, Director of Faith in the City. “Acting on the growing use of shelters is a moral issue our city needs to address with our City budget. We can and must do more”.

Faith in the City, The Interfaith Coalition to Fight Homelessness and representatives from several Out of the Cold shelters helped pen a letter to the Mayor John Tory, requesting the City open further shelter space, and avoid budget cuts to housing and homelessness prevention.

The City budget includes $1 million in cuts to homelessness prevention and will see existing units close due to inadequate maintenance funds. City Council votes on the Budget during its special meeting on Wednesday.

Read the letter to the Mayor and Council