Progress and Pitfalls: A Review of Community Use of Schools and Access to Municipal Spaces 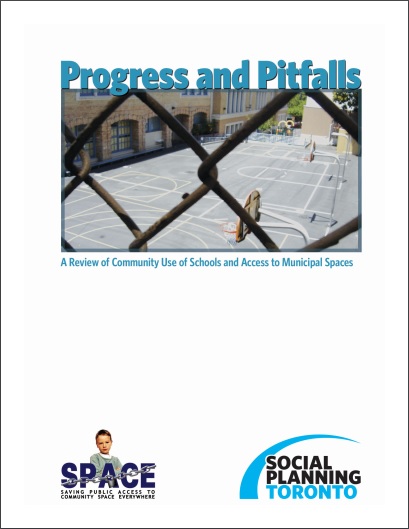 Prior to the provincial Community Use of Schools Policy and funding (CUS), fees for community use of schools had risen sharply across Ontario, resulting in closures of programs and steep declines in use. The CUS program was launched in July 2004 with a $20 million investment, followed by a further enhancement in February 2008, with a province-wide plan to increase funding from $20 million to $66 million by 2012.

In March and April of 2009, SPACE (Saving Public Access to Community Space Everywhere), a provincial coalition, and Social Planning Toronto (SPT), a nonprofit community organization, conducted a follow-up survey to our 2005 and 2007 evaluations of the provincial CUS policy, program and funding (SPACE/CSPC-T, 2005; SPACE/CSPC-T, 2007). We received 358 survey responses from organizations across Ontario. This year we also investigated community access to municipal facilities.