Poverty drops in Toronto, but it's temporary. So what can we learn?

Newly released data from the 2021 Census indicate that poverty1 was reduced for many Toronto residents in 2020. The data discussed below, which are based on 2020 income, show that significantly fewer people in Toronto lived on low income in 2020 compared to 2015. However, even Statistics Canada has cautioned that these developments are not expected to continue in 2021 and 2022.

From 2015 to 2020, poverty rates in Toronto fell for all age groups, with children and families benefitting the most (Figure 1). Over the five-year period: 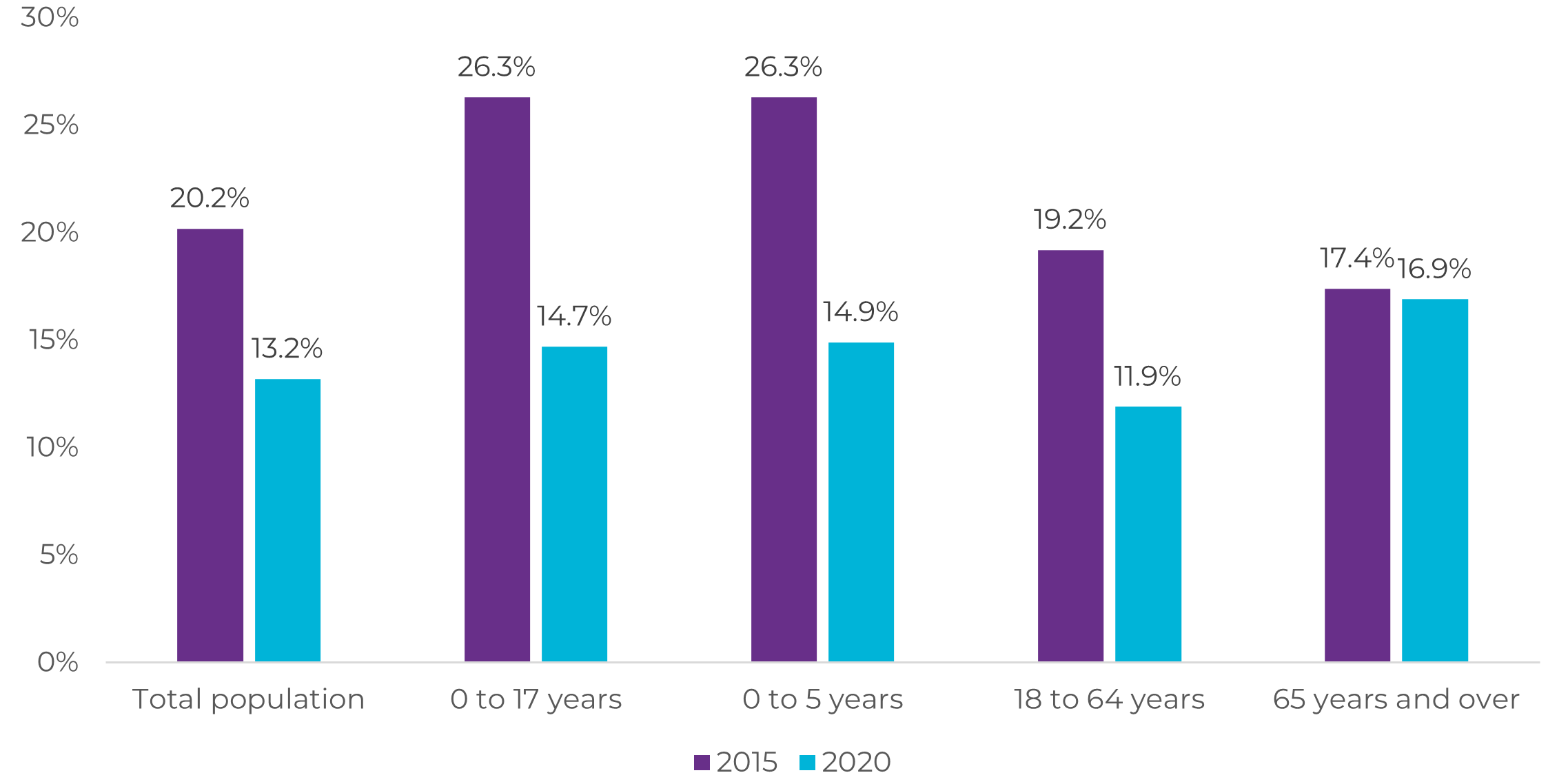 Poverty reduction was also widespread across the city: child and family poverty decreased in every single ward in Toronto. Figure 2 below displays the percentage point change in child poverty for each ward. 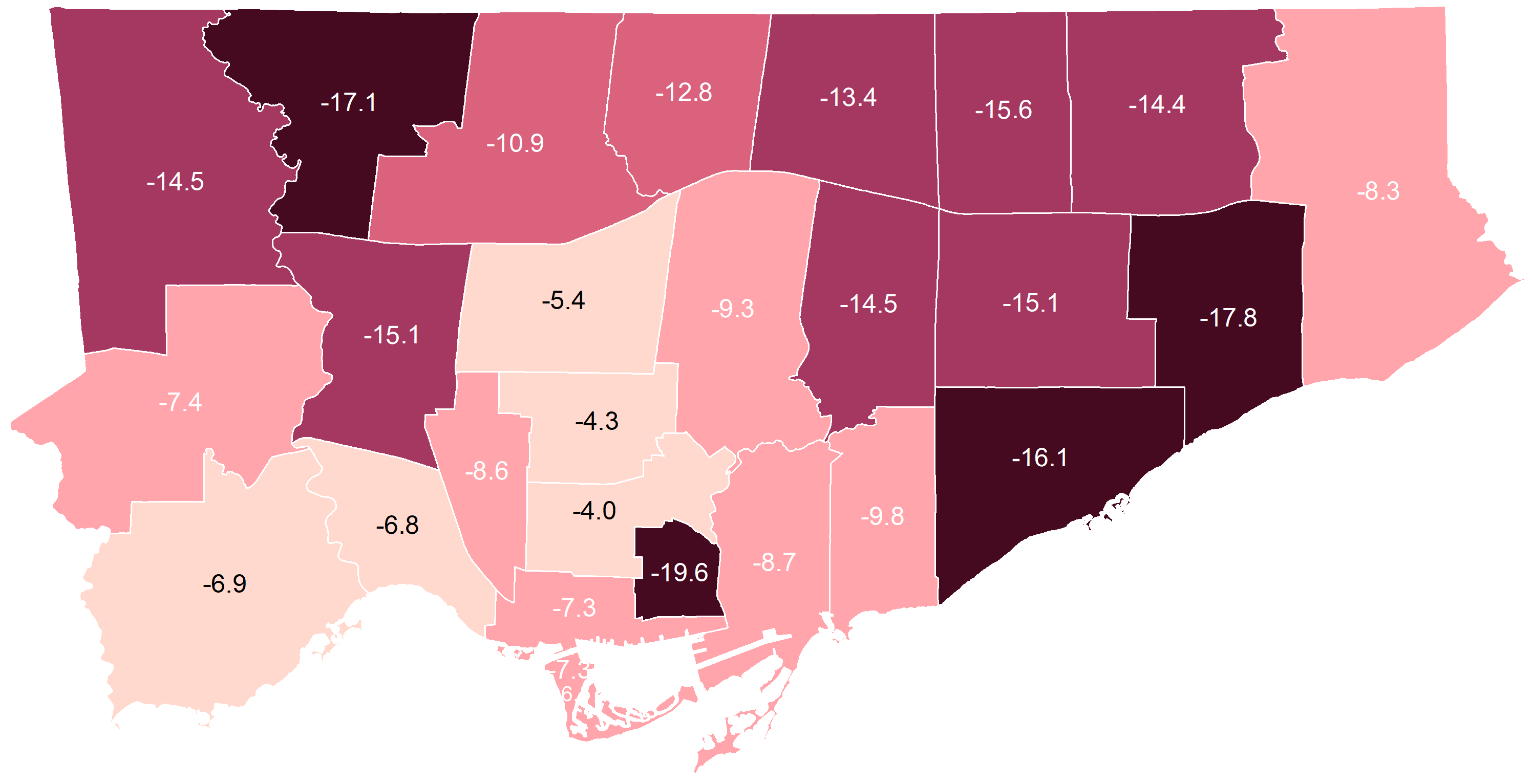 The proportion and patterns of low income is not the only way economic wellbeing is assessed. How income is distributed across the population, commonly measured using the Gini coefficient,  is another important measure. Using this index, a score of 0 represents a perfectly equal distribution of income, while 1 signifies total income inequality. The Gini coefficient of adjusted after-tax income of households in Toronto went from 0.428 in 2015 to 0.371 in 2020. Despite this decline in income inequality, Toronto’s Gini coefficient was still higher than Canada’s (0.302) and Ontario’s (0.308).2

Despite this 2020 improvement, child poverty still persists in Toronto

Because the levels of child and family poverty were so high, they remain high despite the 2020 reductions. 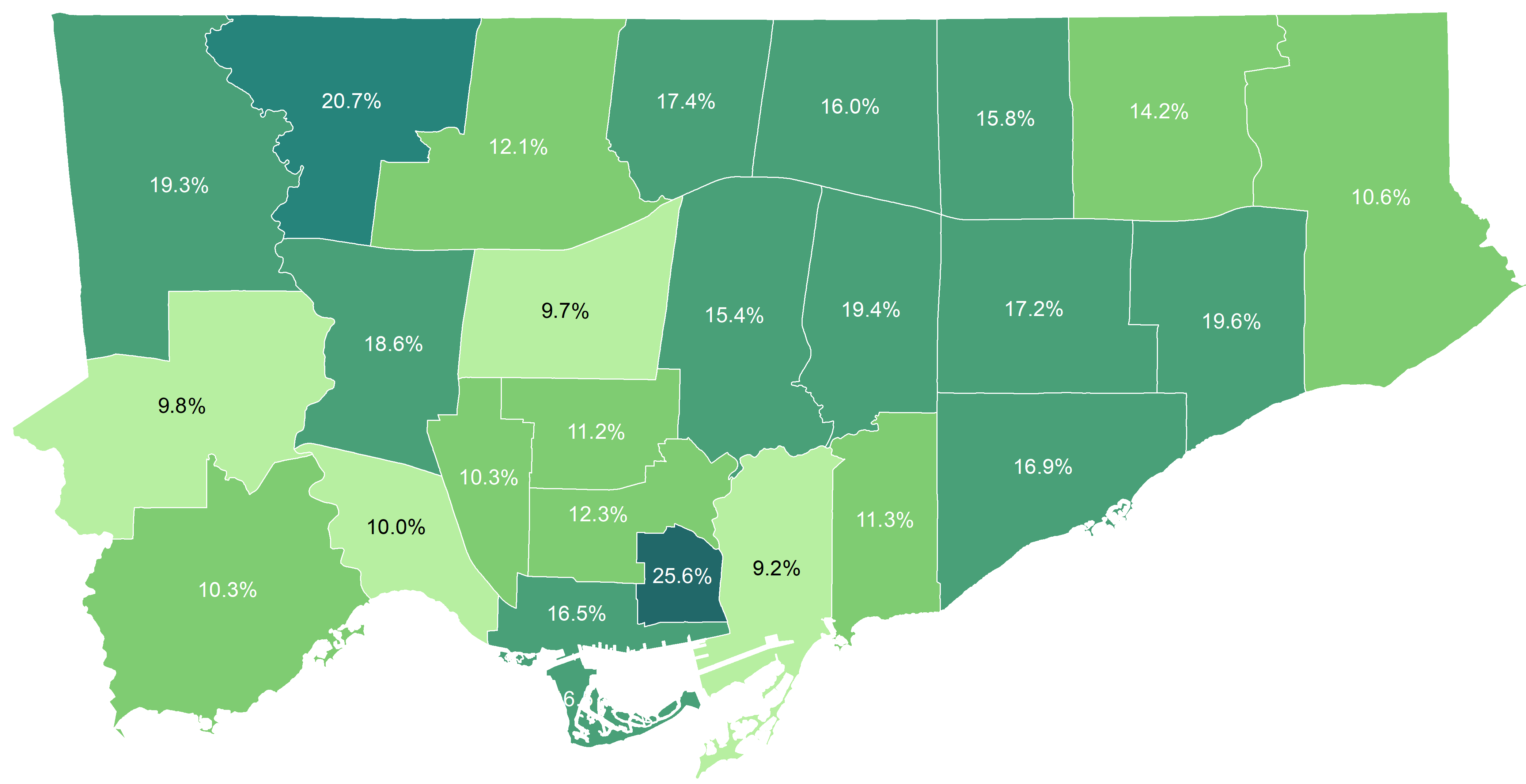 When we narrow in on census tracts (smaller geographic areas than wards), pockets of child poverty still exist at concerning levels (Figure 4). 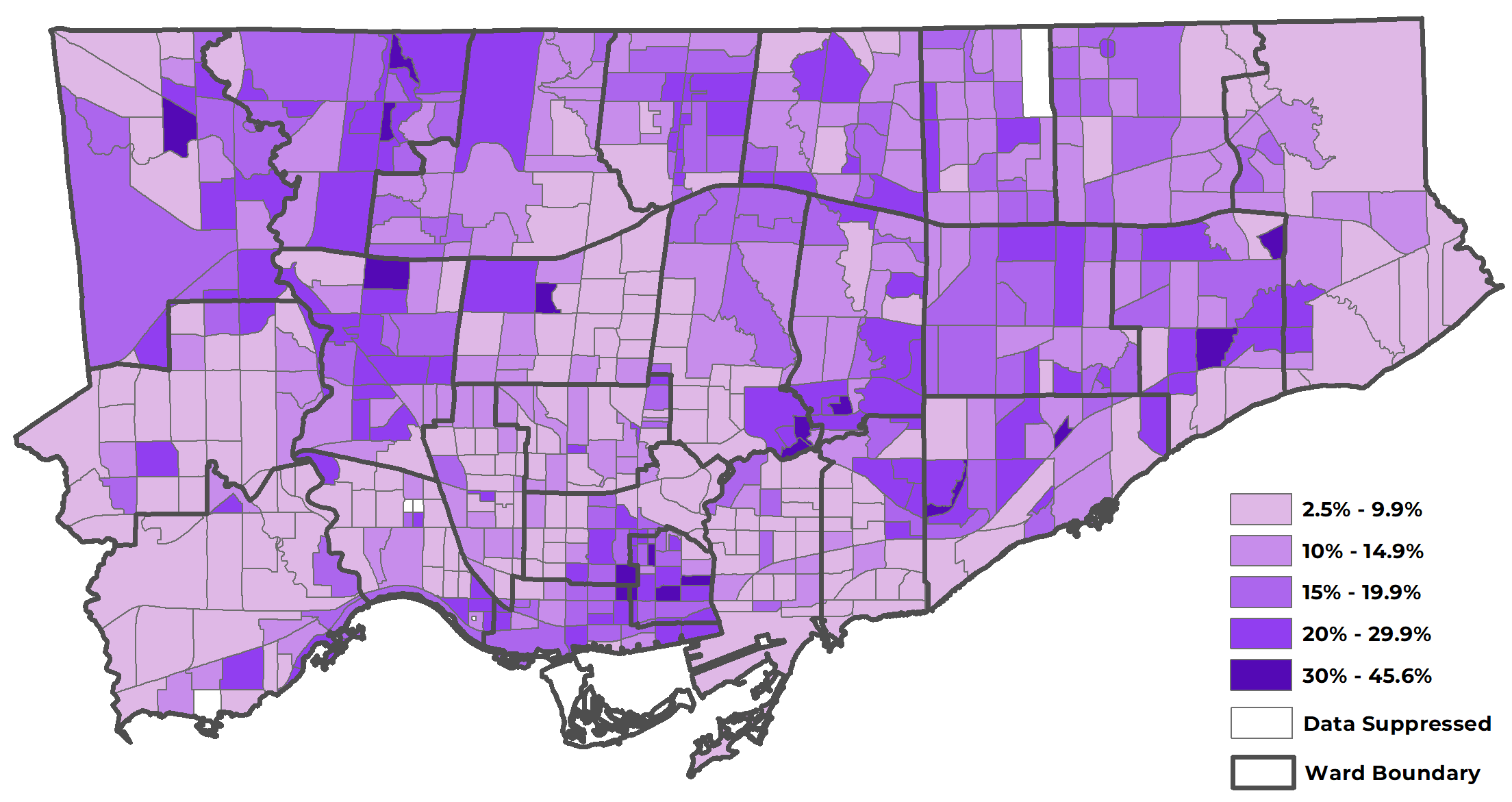 While these data are based on significantly smaller populations,3 they show a need for highly localized responses to poverty reduction. 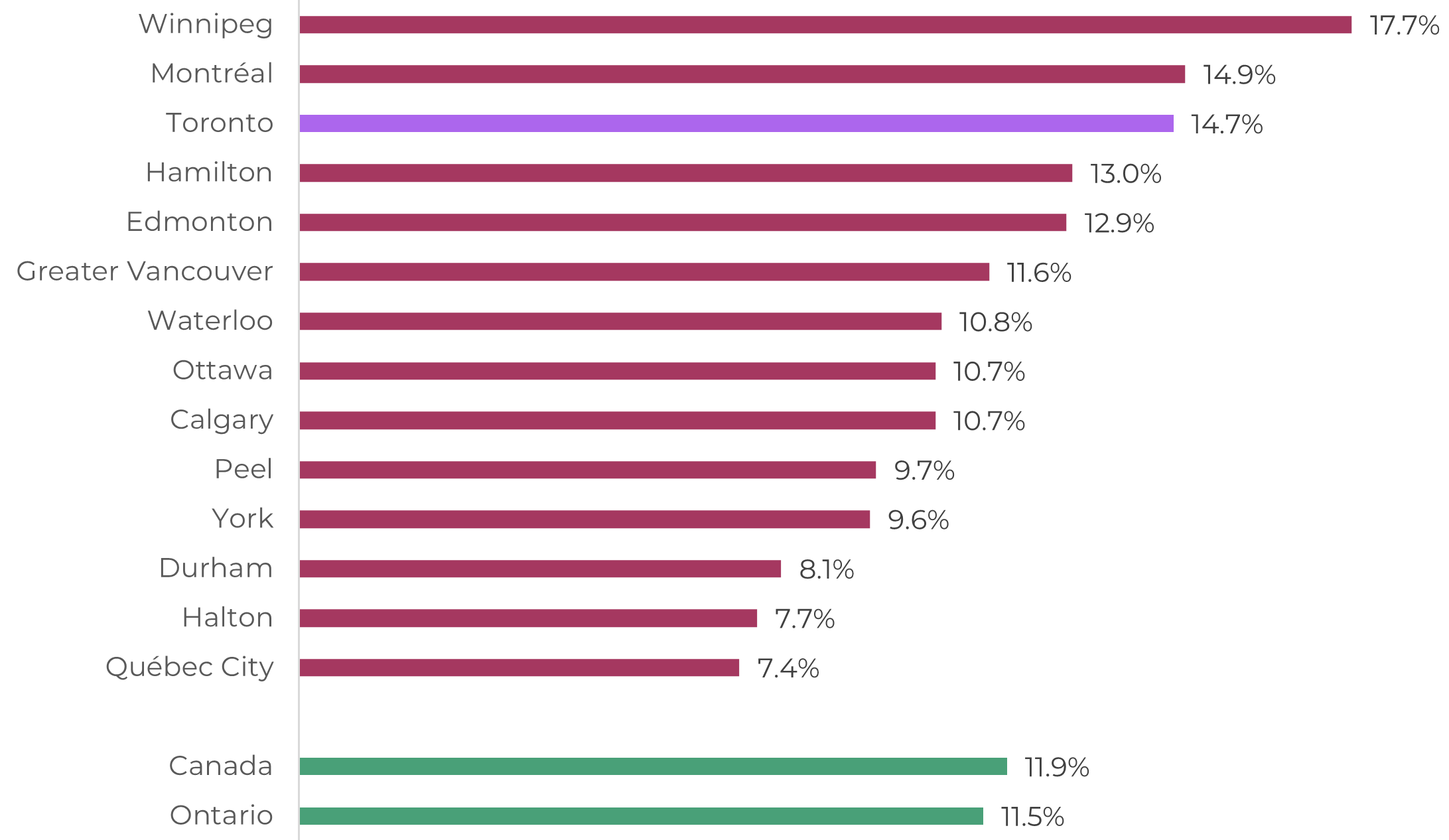 So what can we conclude? That bold and swift government action provided temporary relief

What was different in 2020 compared to 2015 that caused poverty to drop? With the onset of the COVID-19 pandemic in 2020, the federal government introduced the Canada Emergency Response Benefit (CERB) — a lifeline for many residents who suddenly couldn’t work due to lockdowns and closures. In its initial form, CERB offered an immediate and low-barrier $2,000 a month to qualified applicants.

Low-income children and their families have also benefited since 2016 from the Canada child benefit (CCB), which has increased annually since 2018 and is adjusted based on family net income. With the onset of the pandemic, eligible families could also receive an additional CCB top-up in 2020.

Figure 6: Percentage of Residents 15 and Older Who Received Government Transfers, 2015 & 2020, City of Toronto 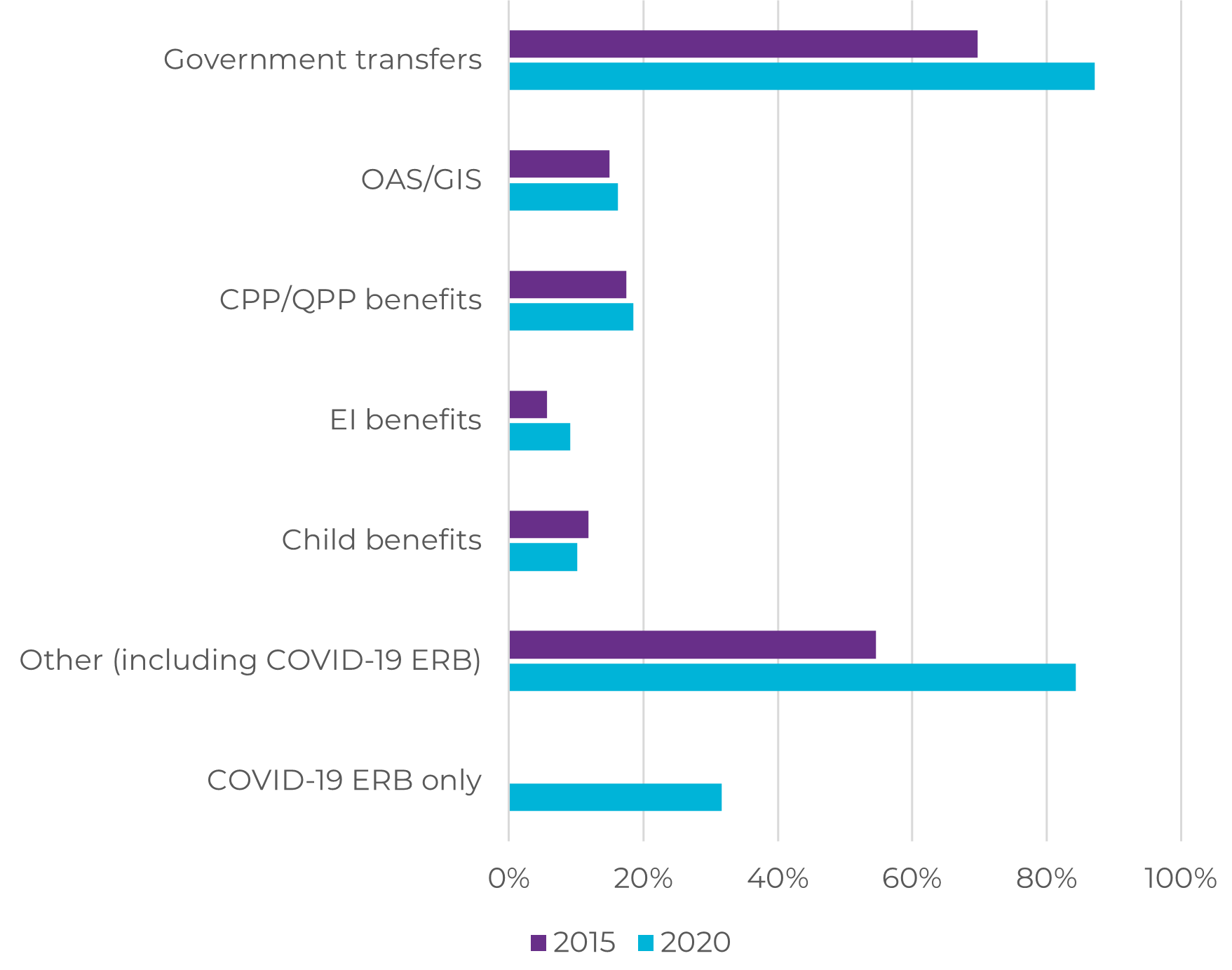 The median amount received from emergency benefits was $10,000 (Figure 7).

While these figures are not currently available for families in Toronto, analysis from Statistics Canada points to higher government transfers (both child benefits and pandemic-related benefits) as being the driving factor behind the decline in poverty for children and their families.

Just the tip of the iceberg: We need more data to fully understand poverty

Even though poverty declined in 2020 for Toronto’s population, the situation today looks vastly different for many residents.

While poverty is an important indicator of socioeconomic wellbeing, measuring income alone does not provide a complete picture of a person’s financial circumstances. Expenses are just as important.

For many households, shelter costs make up the largest single expenditure in their budget. In 2021, the average rent for a two-bedroom apartment was $1,666 for a purpose-built market unit and $2,355 for a condominium apartment. However, these figures reflect rental housing costs for all units, including those not currently available — average “asking rents” for available units are much higher. Although asking rents experienced a slight lull during the pandemic, according to rental housing search website Rentals.ca prices have been on the rise once again.

Adding to this burden, inflation reached 7.7% in May of this year — the highest it's been in almost 40 years. The rising cost of living means that residents have to spend more to get the same amount of goods and services — a troubling situation for many low-income families who don’t have much wiggle room in their budgets.

The effects of the rising costs of essential items can be seen in food bank usage. Daily Bread Food Bank reported 171,631 food bank visits in June of this year — a record high, up from about 60,000 visits a month pre-pandemic — and almost 8,000 new food bank users.

The recently released census data is only the tip of the iceberg. Over the next year or so, much more census data will become available, including poverty data for various socio-demographic groups. This disaggregated data will allow us to develop a deeper understanding of how poverty affected communities differently. We know from our previous child and family poverty report that children from systemically marginalized groups, including those who are Indigenous, racialized and newcomers, have disproportionately high rates of poverty.

Bold and sustained action from each order of government is essential

The data released suggests a story of families who were already struggling to make ends meet when they lost their jobs or were forced to leave work or reduce their hours to care for children before being temporarily lifted out of poverty by government assistance.

Perhaps the most telling lesson from the decline in poverty in 2020 is this: if there’s (political) will, there’s a way. The data captured in the 2021 Census shows the potential of government policy to make a substantial difference in the lives of families and in communities.

While the pandemic continues to affect families and communities across the city, federal benefits are significantly less plentiful, countless people are having to pay back CERB because they’ve been deemed ineligible for all or some of what they received, sick days remain a temporary intervention, and the affordability crisis is taking a heavy toll across the city on the wellbeing and financial security of those most vulnerable. The need for long-term government support, from all levels of government, remains high.

As we move into pandemic recovery, bold and sustained investments in individuals, communities, and programs are essential. Each level of government must maximize the tools at their disposal and seize this moment to do things differently, starting with affordable, safe, and sustainable housing, child care, transportation, employment, and income security. Now is the time to create more equitable and inclusive systems so that children and families can move out of poverty permanently and with dignity.

Here in Toronto, we have at least two key opportunities to address child and family poverty in the near future. We can vote on October 24 for City Councillors and a Mayor we can depend on to take significant action on poverty. We can also push the City of Toronto, when it develops the next action plan for its Poverty Reduction Strategy, to ground it in evidence of best practices in poverty reduction, track progress using clear measures, and report regularly and honestly on what is working and what is not.

As well, if you have been affected by CERB clawbacks or repayments, you can:

Our sincere thanks to Leila Sarangi, Director of Social Action at Family Service Toronto and National Director of Campaign 2000, for her insightful contributions to this post.

1. Throughout this post, “low-income” and “poverty” are used interchangeably to refer to household income that falls below the low-income measure, after tax (LIM-AT) threshold. The LIM-AT is a threshold calculated at 50 percent of the national household median income and is adjusted for household size. For more information on the measures of poverty see: https://maytree.com/wp-content/uploads/How_do_we_measure_poverty_May2017.pdf ↩

3. According to Statistics Canada, census tracts are “small, relatively stable geographic areas that usually have a population of fewer than 7,500 persons.” Each of the 16 census tracts mentioned here have between 195 and 2,820 children aged 0 to 17. ↩