SPT and partners call for action on overcrowding in rental housing: A housing issue, a planning issue, and a racial justice issue

July 21 update: Good news! Councillor Wong-Tam’s motion did not require a Council vote. City staff will now carry out the work on overcrowding in rental housing. Watch for a staff report in the first quarter of 2022. We’ll keep you in the loop as this work proceeds.

Overcrowding is a widespread problem in rental housing. In addition to an important planning concern, it is also relevant to racial and social justice, as overcrowding disproportionately affects Indigenous peoples[i], racialized individuals[ii], newcomers[iii], refugees[iv], lone mother–led families[v], and low-income households[vi]. Further, it is a spatial or place-based problem, with higher rates of overcrowding among tenants in the northwest corner of the city, parts of North York and East York, and most of Scarborough.

Consequences of overcrowding include increased stress, adverse effects on health and well-being, negative impact on mental health, added challenges to family dynamics, undermining of student learning due to a lack of quiet study space, and greater risk of contracting and difficulty managing infectious diseases such as COVID-19. While public policy focuses on the affordable housing crisis, far less attention is paid to issues of overcrowding and ensuring access to rental housing that is suitable and affordable.

Social Planning Toronto (SPT) is working to advance the right to housing, including the right to suitable and affordable rental housing in Toronto, through various policy avenues including the Official Plan review process. Most recently, SPT and our research partners Dr. Luann Good Gingrich (York University) and Dr. Naomi Lightman (University of Calgary) called on the City of Toronto to address the problem of overcrowding in rental housing and its racial, social, and spatial inequities. In response to our deputation at a June Planning and Housing Committee, Councillor Kristyn Wong-Tam moved a motion that was unanimously supported by the committee to advance work on this important issue.

Our deputation responded to a weighty new 216-page City Planning report, “Right-Sizing Housing and Generational Turnover.” As defined in the report, housing is considered “right-sized” when a household has the exact number of bedrooms required based on the household’s size and composition, according to the National Occupancy Standard, as opposed to underhousing (i.e., too few bedrooms) or overhousing (i.e., a surplus of bedrooms). The report estimates possible future housing needs based on current rightsizing, turnover and downsizing trends.

While the report was produced to inform the Municipal Comprehensive Review of the Official Plan under the Province’s Growth Plan, SPT, Dr. Good Gingrich, and Dr. Lightman saw the opportunity for this extensive analysis to do double duty by advancing work to address the significant problem of overcrowding in rental housing. Drawing on findings from our joint report, “Spaces and Places of Exclusion: Mapping Rental Housing Disparities for Toronto’s Racialized and Immigrant Communities,” we called on the City to:

Further, we recommended that the City examine both universal and targeted responses to address problems of overcrowding in rental housing.

In response, Councillor Kristyn Wong-Tam moved the following motion, which was unanimously supported by the committee:

“The Planning and Housing Committee:

Toronto City Council will vote on the motion at its July 14–15 meeting. If passed, this research will employ Indigenous and equity lenses to examine overcrowding and policy options for addressing it. This work will provide an opportunity for community advocacy to advance the right to housing as it pertains to overcrowding in rental housing.

Highlights from our deputation

“Spaces and Places of Exclusion” research

Key findings on overcrowding in rental housing in Toronto:

Percentage of non-racialized individuals in the City of Toronto living in rented dwellings that are unsuitable (2016), by ward 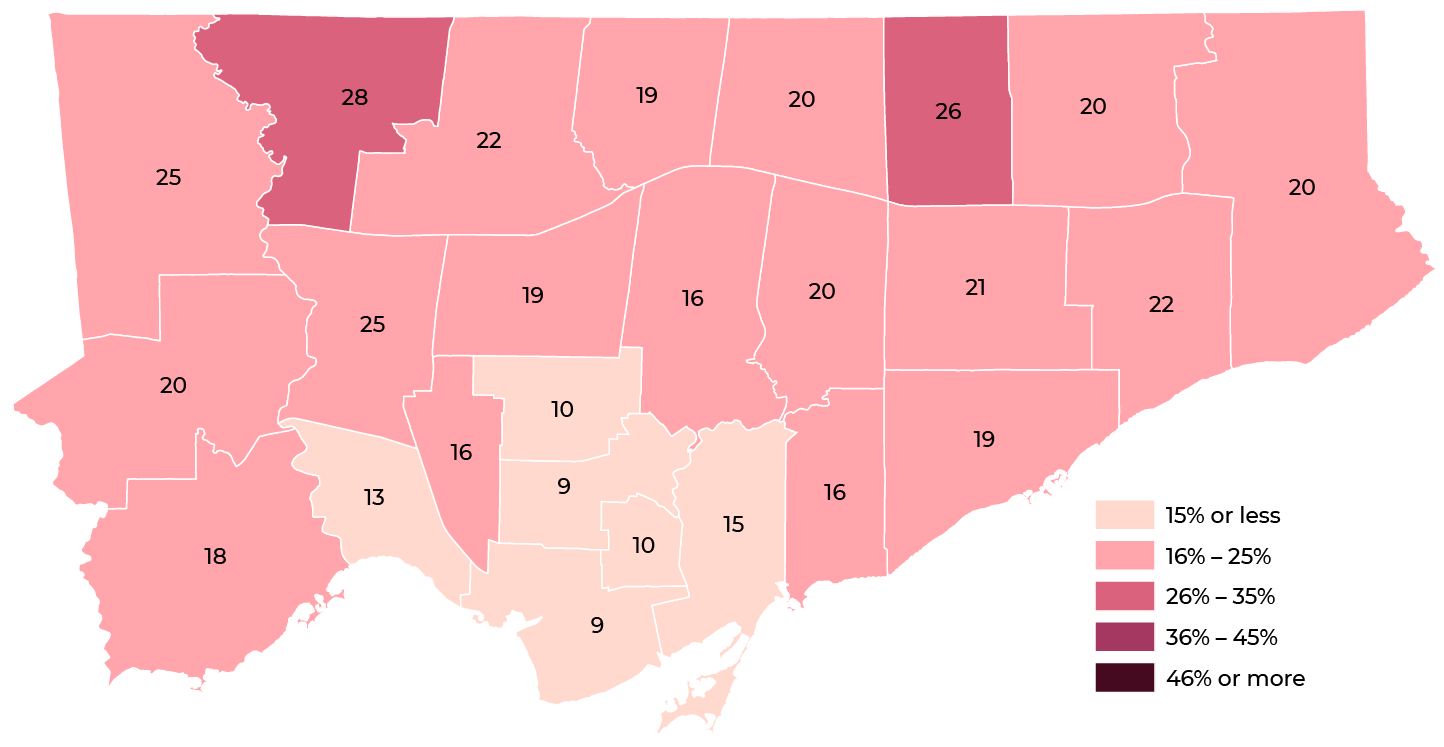 Percentage of racialized individuals in the City of Toronto living in rented dwellings that are unsuitable (2016), by ward 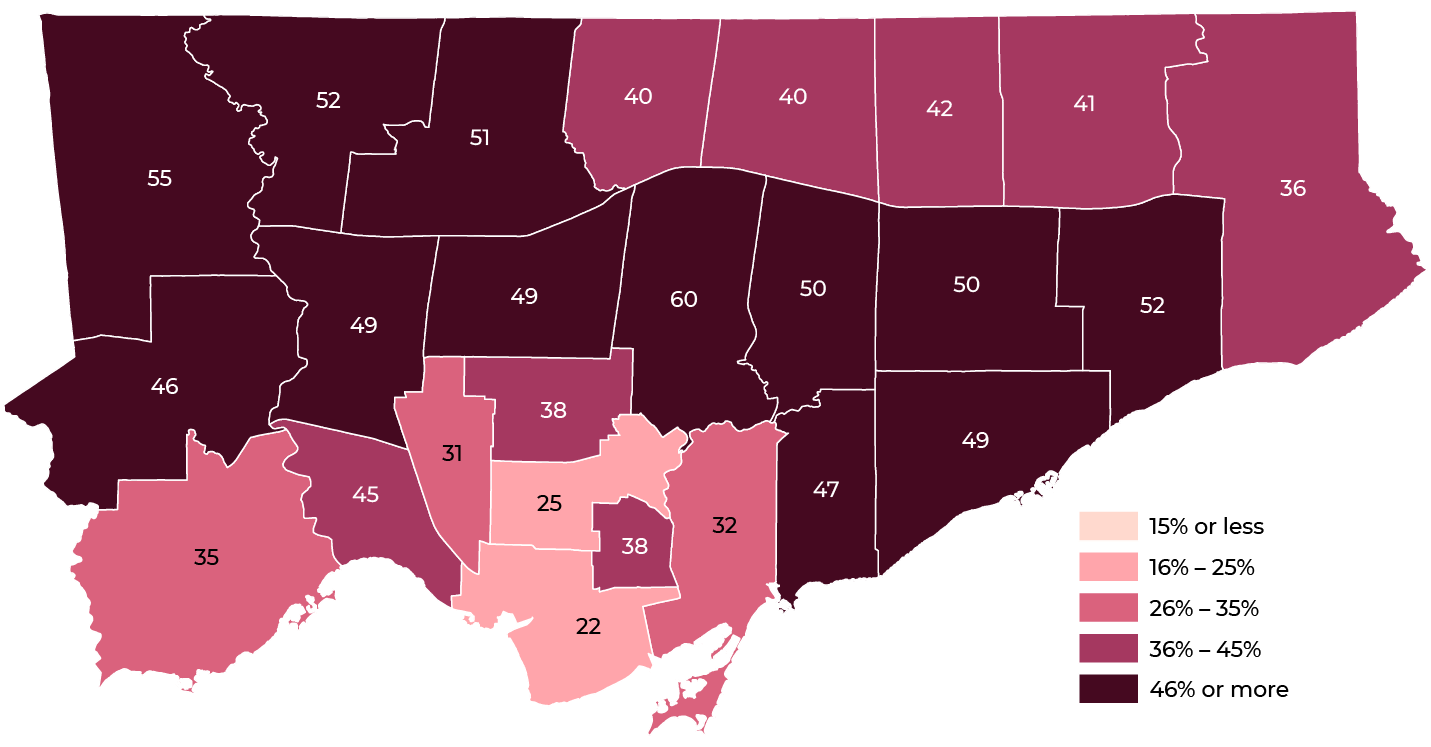 We sometimes hear that overcrowding is a reflection of cultural diversity and varying cultural norms — the implication being that perhaps overcrowding is not a serious concern for racialized and immigrant communities. This is important to discuss.

First, there are cultural differences in household size, multi-generational households, and household types. However, we need to make a distinction between the choices we make about the family members we live with and whether the housing is meeting the need. It is important to separate choices about family and choices about housing, the latter often being deeply constrained for tenants.

To understand these issues more, we accessed additional census data for the Toronto CMA. This data shows that, within specific racialized populations, rates of overcrowding are much higher for tenant households compared to homeowners. For example, South Asian households who rent have a rate of unsuitable housing that is more than three times higher than South Asian households who own their homes. For Filipino households, the rate of unsuitable housing is nearly three times higher for those who rent compared to those who own their own homes. We found similar differences between tenant and homeowner households within each specific racialized population.

Rates of overcrowding for individuals in the Toronto Census Metropolitan Area in 2016, by racialized status and housing tenure 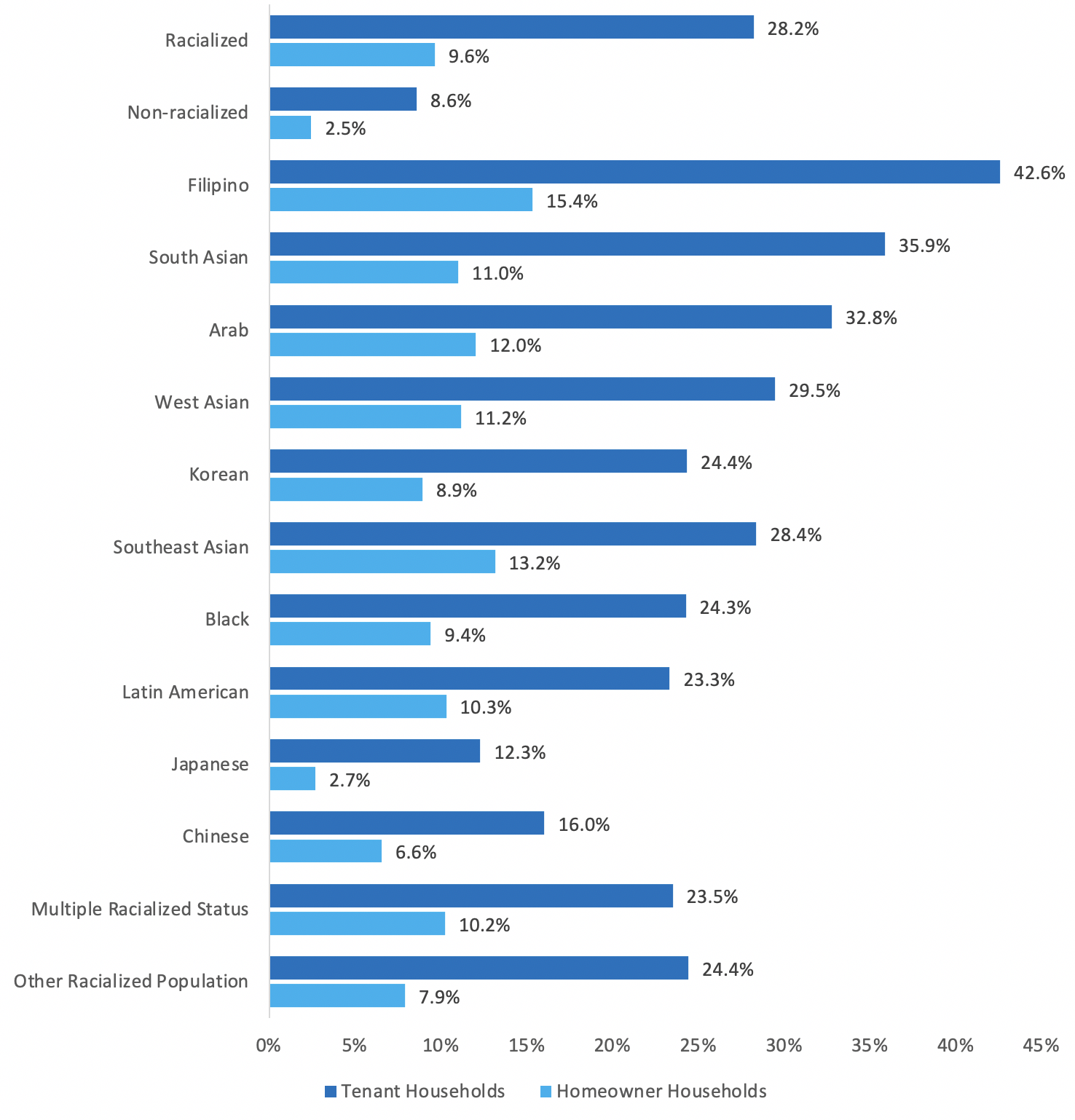 Tenant households, on average, have lower incomes than homeowner households. Furthermore, related analysis shows that, controlling for level of education, immigration status, age, household type, and English as a first language, racialized individuals are 66% more likely to live below the Low Income Measure than their white counterparts.

This data suggests that, given the resources and equal opportunity to make a living, many individuals would opt for more suitable housing for themselves and their families.

Overcrowding is an important marker of stark disparities that are disproportionately experienced by racialized and immigrant communities and that greatly impact their quality of life and require attention and action. Rather than an expression of cultural differences, overcrowding in rental housing reflects a failure of governments to realize the right to housing and a perpetuation of systemic racism.

Councillor Wong-Tam’s motion presents an important opportunity to advance housing as a human right as it pertains to overcrowding and its deep racial, social, and spatial inequities. Toronto City Council will vote on the motion at its July 14–15 meeting. Let your Councillor know that you support the Planning and Housing Committee’s motion on PH24.7 Right-Sizing Housing and Generational Turnover. We’ll keep you up to date on this and other housing policy news, with details on how you can advocate for housing as a human right.

[iii] Newcomer refers to individuals who immigrated to Canada and gained permanent residency status in the 10 years prior to the 2016 Census (2006–2016). This category includes immigrants and refugees.

[v] According to the census: ‘Lone-parent family’ refers to families containing only one parent with his or her child(ren).