Schedule 1 of the Act would amend the City of Toronto Act, 2006 by adding section 226.9.1. This section states that if the mayor is of the opinion that a bylaw could potentially advance a provincial priority, they may propose the bylaw and require Council to consider and vote on it. For the bylaw to pass it requires the support of only one-third of Council. 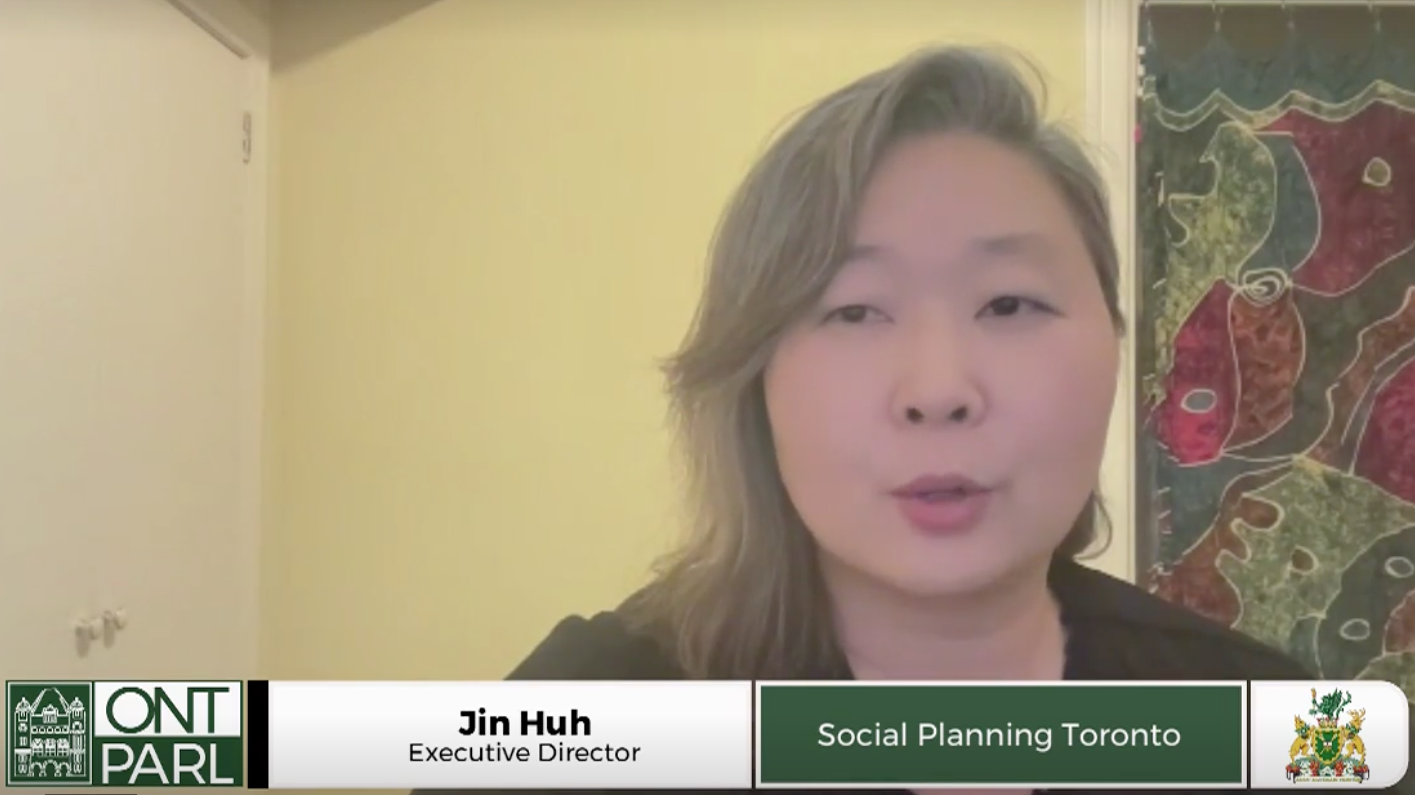 Good afternoon, my name is Jin Huh. I am the Executive Director of Social Planning Toronto (or SPT), a nonprofit, charitable community organization that works with hundreds of organizational partners across the city of Toronto, and we collectively engage hundreds of thousands of residents and grassroots groups to build a more equitable, just, affordable and liveable city through research, civic engagement, policy change, and advocacy.

Thank you, members of the Standing Committee, for having me here to speak with you today.

I would like to speak to how Schedule 1 of Bill 39 will impact communities across Toronto.

I appreciate the stated intention behind this bill — to help implement solutions to some big and complex challenges, such as the housing crisis. With the affordable housing and homelessness crisis in Toronto, coupled with record-high food bank visits, rising inflation and costs, and more and more people who must choose between paying rent or feeding their families, we certainly need out-of-the box approaches.

But this Bill will not be good for communities.

Majority rule at Council is a bare minimum of good democracy. We are talking about removing the bare minimum. Every day in our work we witness the many challenges and barriers facing low-income, Indigenous, racialized, newcomer, and disabled community members in not only accessing services, but engaging civically to ensure policies are shaped to include their realities, and thus solutions are grounded in the real world. We are constantly trying to improve on the bare minimum of democracy to meaningfully engage community members.

It has been proven many times over that those most impacted by programs, services, and cuts provide the greatest insight into how things can be improved for the better.

One person, one mayor, can only understand things from one angle, one perspective. And when only 60 percent of 30 percent of eligible voters — so effectively 18% of the City — voted for the Mayor and then he is given unilateral powers to introduce new bylaws and is required to get support from only eight councillors, this does not sound like a good approach to addressing the very complex challenges facing so many communities.

In a successful democracy — which is about power in the hands of the people — diversity is our strength, and the solutions to the city’s and province’s and country’s most complex problems are ones that must be addressed by the whole of society. Not one person. Mayor Tory has many strengths but he is no superhero. He will not singlehandedly save Gotham City.

If we take away the ability for the majority of City Councillors to advocate on behalf of communities across the whole city, we take away good democracy, we take away well-rounded, evidence-informed data and decision-making, we take away critical checks and balances, and we worsen the problems through blindspots and misinformation.

If we allow only one-third of Council to make decisions, we cut the voices of those that are not represented in those decisions. We cut two-thirds of the city out of the conversation — that means you are cutting 1.8 million residents in the city of Toronto out of the conversation. Access to democratic engagement processes had already been stripped away from residents in 2018 when the number of wards and Councillors was reduced to 25 from 47.

And we can’t speak to bill 39 in isolation from what these new mayoral powers are supposed to help implement — namely, at least to begin, Bill 23.*

Many experts have already spoken to Bill 23 and how, while it will reduce the costs for developers to build, it will actually result in a reduction in affordable housing, limit the municipal government’s ability to secure revenue to pay for affordable housing and homelessness programs, and put more renters at risk of homelessness.

More people will struggle to make ends meet as a result of your decisions here.

And, in the end, these two bills put together will be costlier for governments who will have to deal with the increase in homelessness.

One argument I have heard in favour of this Bill is that it will address NIMBYism in City Council.

Representative democracy doesn’t automatically equate to NIMBYism. We are questioning our basic democratic system when we suggest it does. I have worked with many of the Councillors, new and continuing, and I assure you, the majority of them — like you — do not have a NIMBYistic approach. The people of Toronto voted for these Councillors not just because they can advocate on their behalf, but because they have a strong vision for the whole city — to make it more affordable and liveable.

We should be looking at improving democracy as our country and our province evolve, not finding ways to match our processes more closely with more authoritative regimes. Minority rule is not the solution to NIMBYism.

Finally, I want to share a little about myself and my personal relationship to the Bill.

I am a proud Korean Canadian. My parents grew up in poverty during the Korean war and its aftermath, and our family and community are too familiar with the critical importance of democracy and holding it sacred. We moved to Canada in the '70s to look for a more democratic, fair, and just home. We found it. I am a proud Canadian, but today I am worried. I’m less proud.

Of all the things I have seen communities and whole societies get riled up about the most, it’s about democracy and threats to democracy and the power of the people. Please do not be the ones that go down in history as the ones that diminished what makes our country great. Yes, democracy can be messy and at times unpredictable, but if you look at the history books, it’s the power of the people that has ensured great advances in our society and ensures no one gets left behind — not one superhero.

I ask you to treat municipalities with respect, the whole city of Toronto with respect, and not just the one head of Council. Please listen to the people and do not let this bill pass.