Distance-based transit fares don’t measure up: A picture of inequity in five maps

Affordable, accessible, and reliable public transit is essential to Toronto residents. It affects our ability to get to work, access critical services, connect with family, friends, and our communities, and participate in recreation and cultural activities. Good public transit reduces road congestion, supports our collective response to the climate crisis, and advances environmental goals. And it is vital to advancing the City’s poverty reduction strategy, supporting local economies, and realizing our vision for building a better, more equitable, and sustainable city.

Despite ridership decline due to COVID-19, the public transit system has remained a vital service for essential workers and many low-income residents throughout the pandemic. As the economy re-opens, the Toronto Transit Commission (TTC) will need to build back better to attract riders back.

The TTC and York Region Transit (YRT) are currently developing a joint 5-Year Fare Policy, examining a variety of ways of charging for public transit use, including fares based on distance travelled. This review process is an important opportunity to create a more equitable transit system.

In response to the fare policy review, we examined the impact that TTC fares based on distance travelled would have on transit users living in different areas of the city. Drawing on data from the Census and the Transportation Tomorrow Survey, our findings show that distance-based fares applied within the City of Toronto would negatively impact working-age residents in the inner suburbs — largely racialized and immigrant residents — and deepen racial, social, and geographic / spatial inequality across the city.

Five maps tell the tale. And it’s a familiar tale.

Among workers who use public transit as their main mode of commuting, a higher proportion living in Toronto’s inner suburbs have long commute distances of 15 km or more (Map 1) and durations of 60 minutes or more (Map 2) compared to those living in the old City of Toronto and near subway lines. Similarly, the average distance travelled by public transit for all purposes tends to be longer for working-age adults living in the inner suburbs (Map 3) compared to the old City of Toronto and most areas near subway lines.

① Percentage of Workers, Aged 15 and Over, Who Commute 15 KM or More from Home to Work Using Public Transit as their Main Mode of Commuting, by Census Tract, for the City of Toronto, 2016 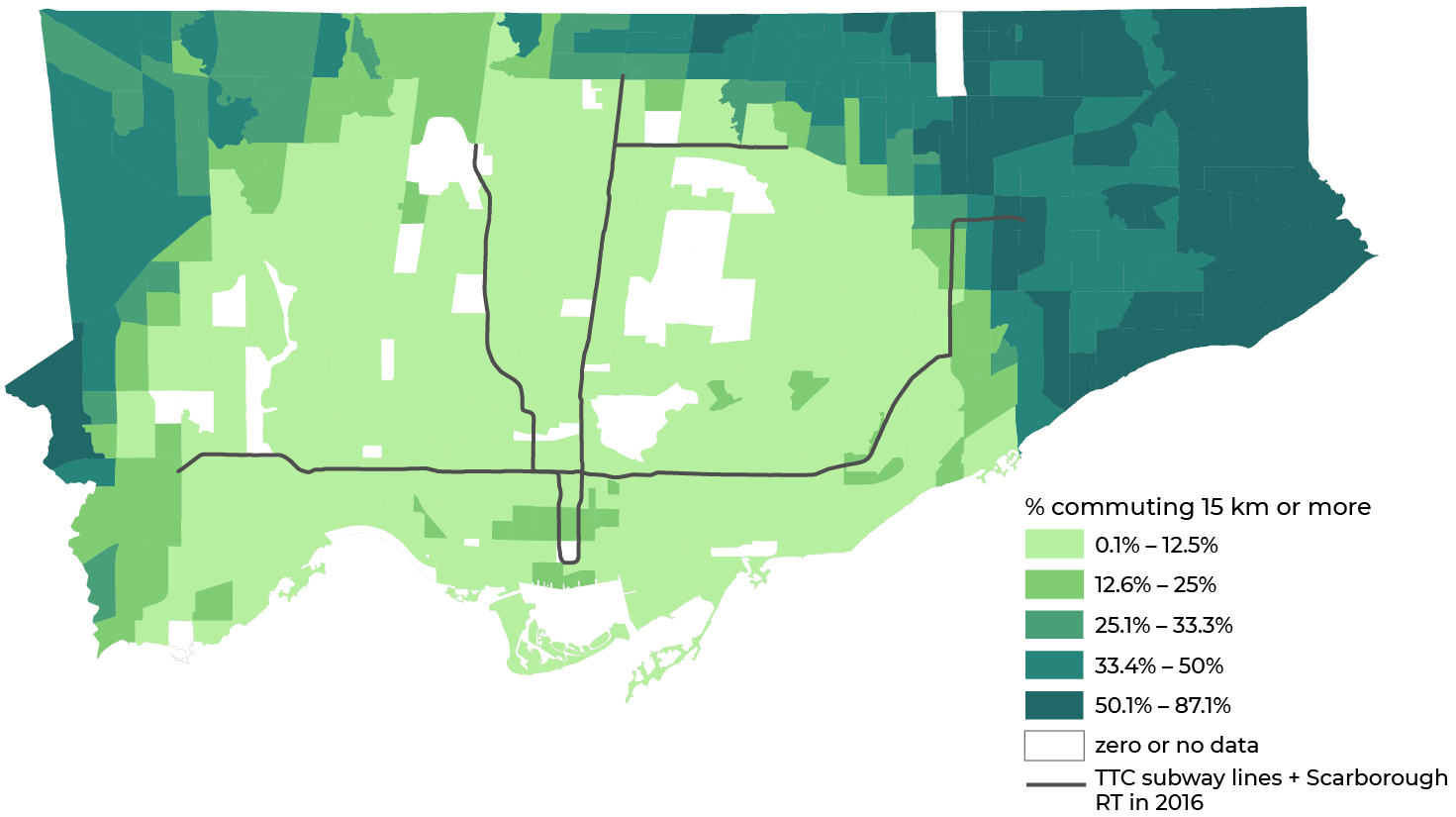 ② Percentage of Workers, Aged 15 and Over, Who Commute 60 Minutes of More from Home to Work Using Public Transit as their Main Mode of Commuting, by Census Tract, for the City of Toronto, 2016 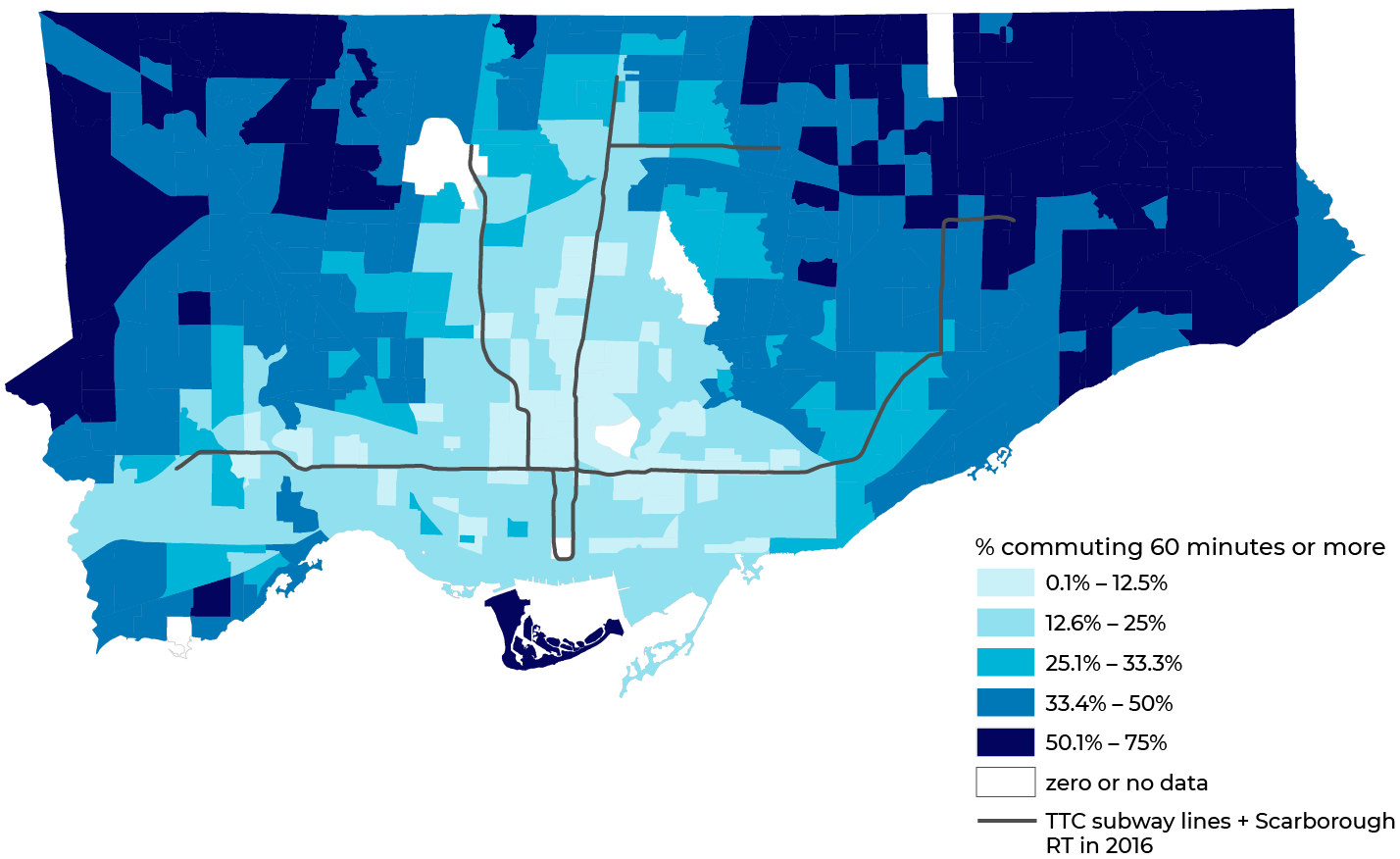 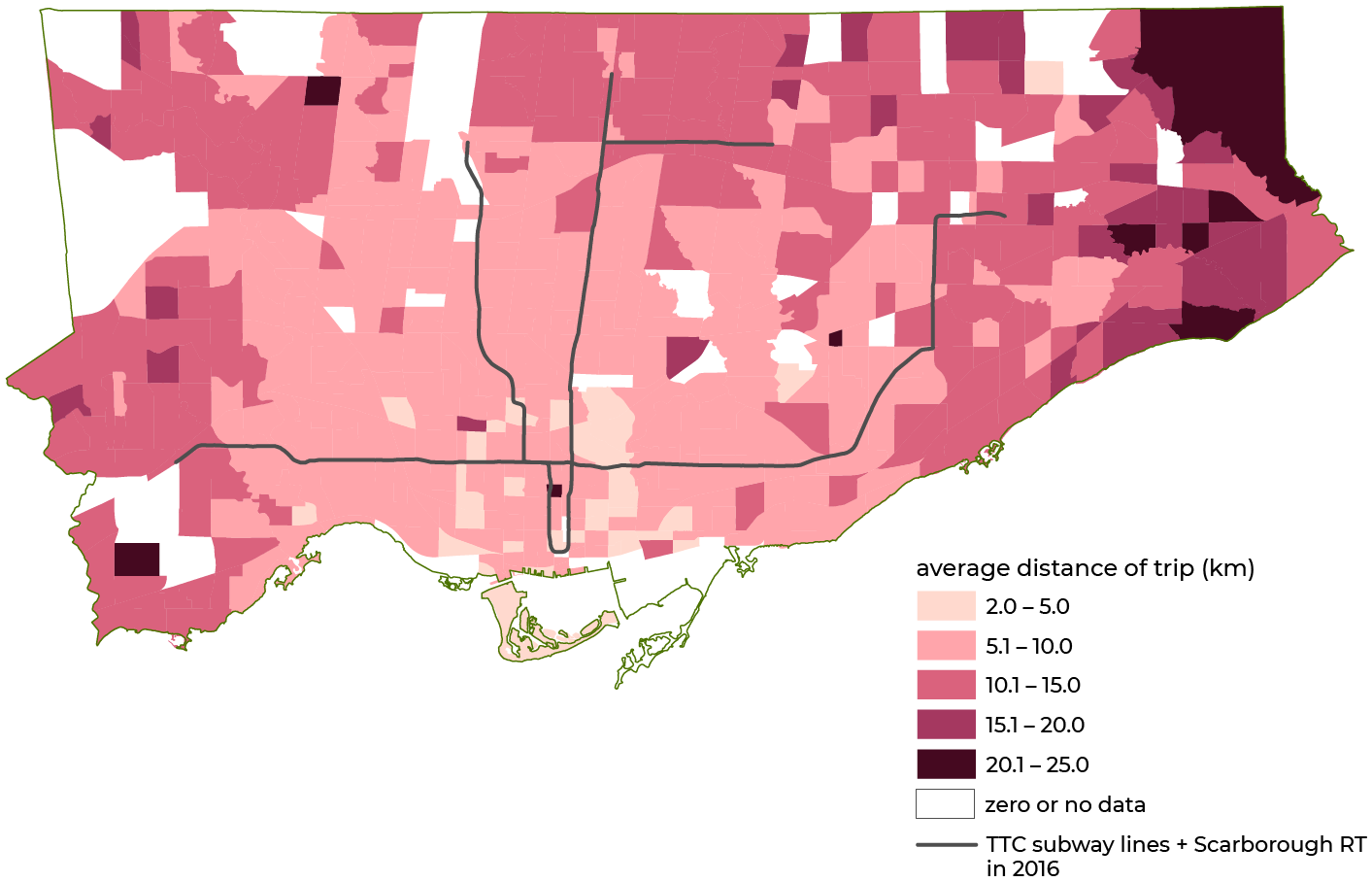 Many areas of the city where longer transit commutes and trips are common — including the northwest corner of the city, along the city’s northern boundary, and most of Scarborough — are also areas that are highly racialized (Map 4) and have populations with a high proportion of immigrants (Map 5).

④ Percentage of the Population in the City of Toronto who are Racialized Individuals (2016), by Census Tract 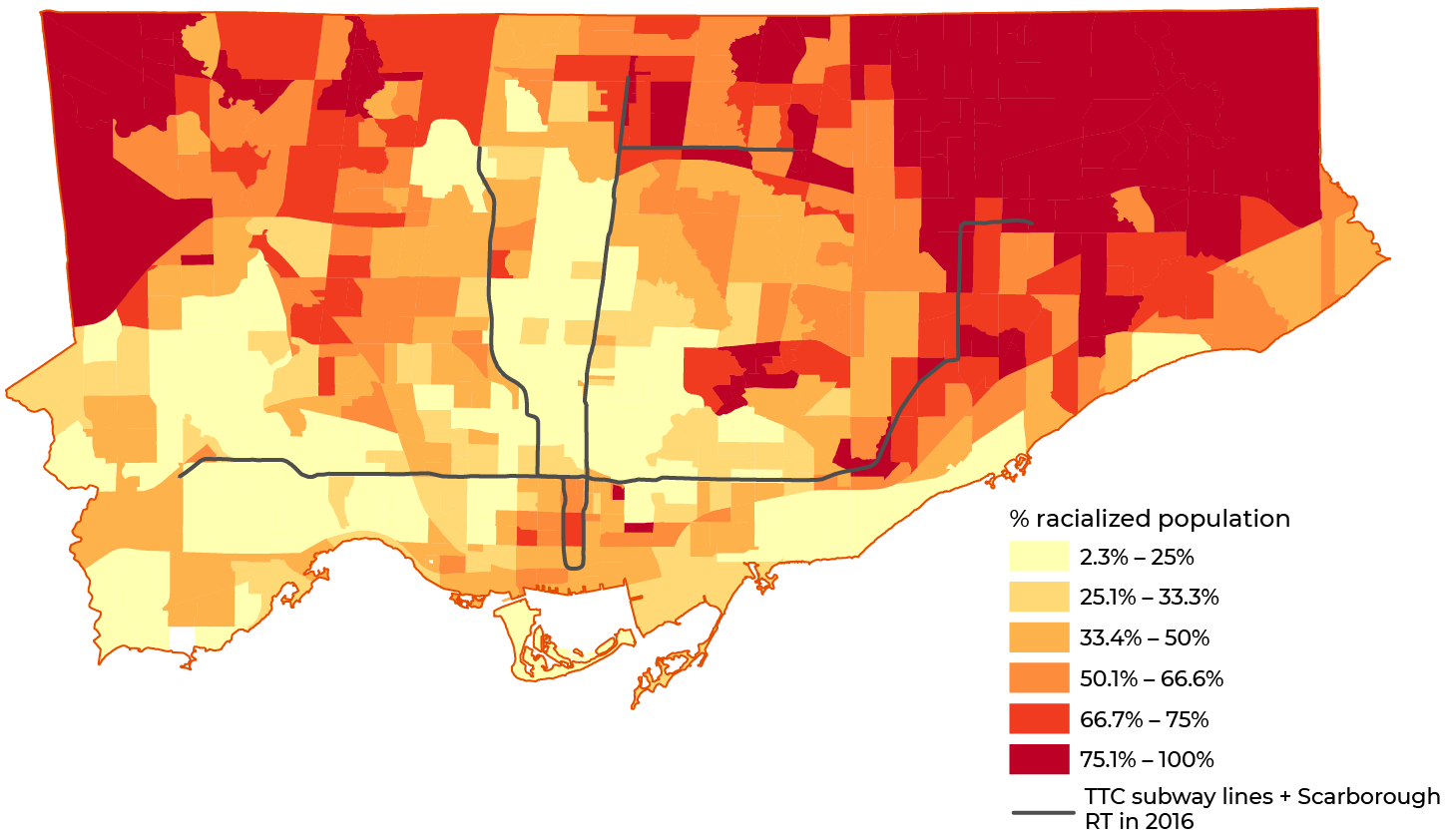 ⑤ Percentage of the Population in the City of Toronto who are Immigrants (2016), by Census Tract 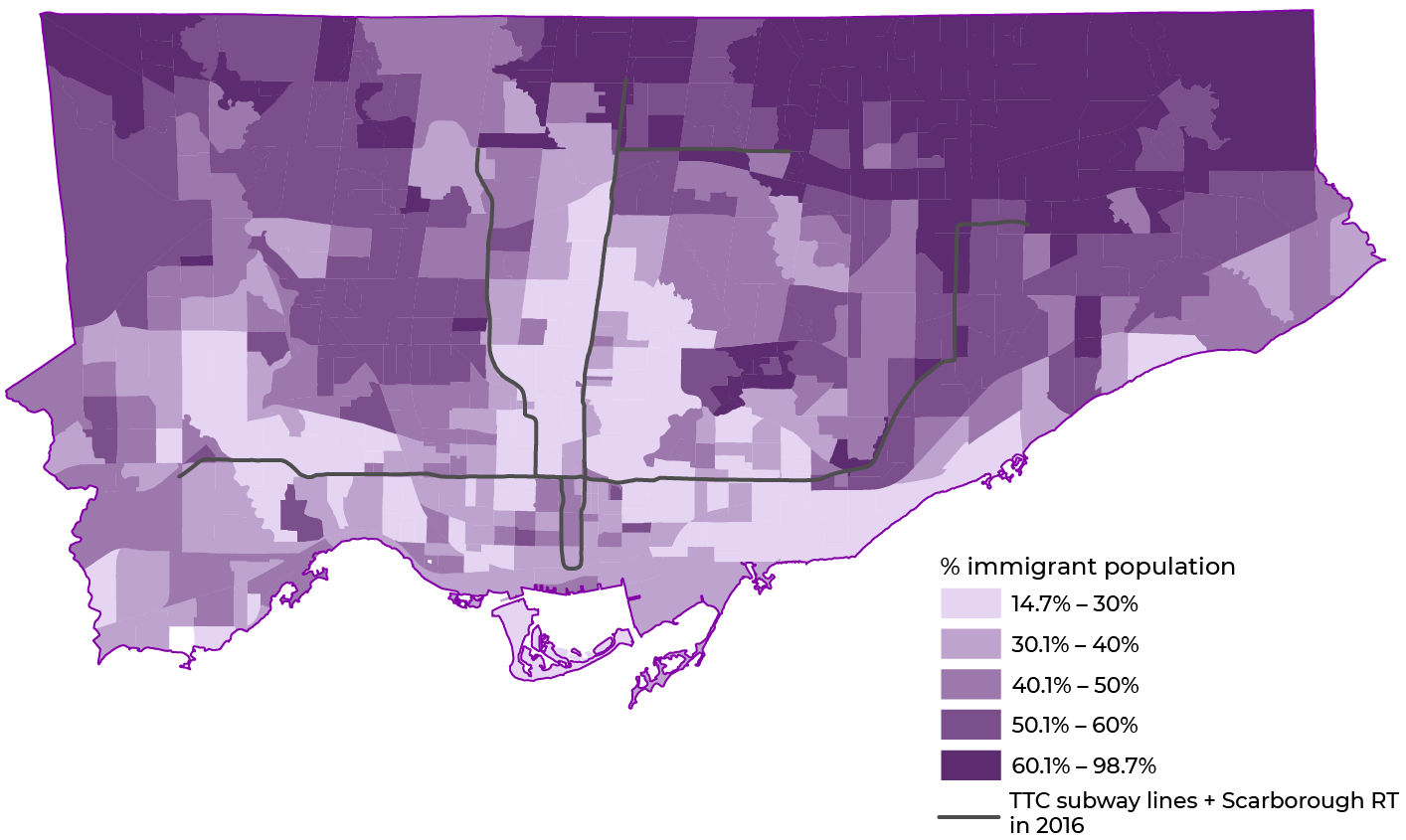 The maps reveal associations between areas that are highly racialized and have high proportions of immigrants and areas with a higher proportion of workers with long transit commutes and longer trip distances. However, publicly available data was limited and did not allow for a more detailed analysis, such as a comparison of commute durations for racialized and non-racialized workers using Toronto's public transit.

To fill this data gap, we conducted an analysis using Census data for the Toronto Census Metropolitan Area (CMA), a large geographic area that includes the City of Toronto and neighbouring regions and municipalities.1  This analysis showed that among workers in the Toronto CMA using public transit as their main mode of commuting, a higher proportion of immigrants report commutes to work of 60 minutes or more compared to non-immigrants. Similarly, racialized workers are more likely to have commutes of 60 minutes or more compared to non-racialized workers. This finding was consistent for all specific racialized groups (e.g., Chinese, South Asian, Black individuals), except for Korean individuals, who have lower rates of long commutes, similar to non-racialized individuals.2

Our analysis shows that fares based on distance travelled within the City of Toronto would disproportionately and adversely impact workers and working-age residents in the inner suburbs who rely on public transit. As these communities are largely racialized and immigrant, a move to distance-based fares, applied within the city, would deepen existing racial and social inequality. Residents in the inner suburbs already suffer from inadequate transit services.3  Distance-based fares would add insult to injury, exacerbating existing inequities and widening geographic divides.

As part of the fare policy review, the TTC and YRT are examining several fare options, including two distance-related options.

1. Fare by distance and mode:

“Fare for local services (buses and streetcars) would be unchanged — a single cost no matter where you travel. Subway would be an additional fare, based on the length of the trip on the subway.”

Due to data limitations, we were unable to examine the use of subways in commutes and transit trips. However, it is not difficult to assess the equity impact of the fare-by-distance-and-mode option. Access to every mode of public transit — subways, buses, and streetcars — is essential for transit users. Putting a premium on subway use would exclude and disadvantage individuals with lower incomes — disproportionately impacting Indigenous, racialized, and immigrant communities, people with disabilities, women, and younger adults — and exacerbate existing inequities in public transit access. From an equity perspective, it’s hard to imagine how this option is even under consideration, and it should be promptly eliminated.

“The whole Greater Toronto and Hamilton Region would be divided into zones and fare would be based on the number of zones travelled through.”

For example, almost one-third of Etobicoke residents commute to another city to work.4  Under a zone system, they could travel to Mississauga, for example, and receive a discount instead of paying two full fares, one for each local transit system, as they do in the current system. The TTC and YRT are also considering introducing a free transfer that would benefit transit users crossing the invisible line between the City of Toronto and York Region.5

However, our analysis demonstrates that distance-based fares applied within the City of Toronto would disadvantage racialized and immigrant communities in the inner suburbs who rely on public transit. Therefore, any zone system should ensure that individuals travelling within the City of Toronto be charged one fare, regardless of distance travelled.

The TTC Board should:

Toronto City Council has voiced its opposition to distance-based fares within the city and supported a single city-wide fare. Next year, Toronto residents will go to the polls to elect the next Mayor and Council. Let’s make sure all future members of Council stick to a single city-wide fare and commit to an accessible, affordable, reliable, and equitable public transit system for Toronto residents.

The TTC Board is expected to review a new staff report on fare policy options at its November 17 meeting — a great opportunity for residents and groups to weigh in on the development of the 5-Year Fare Policy and how to build a more equitable transit system.

Our analysis examined equity impacts of distance-based transit fares using publicly available data from Statistics Canada and the University of Toronto Data Management Group.6 We also accessed data through the Toronto consortium of the Community Data Program.7 While raising important equity concerns, our analysis was limited by the available data.

We used data from the 2016 Census of Population and the 2016 Transportation Tomorrow survey, which reflect pre-pandemic transit use demographics, patterns, and trends. Although more current data, such as from the 2021 Census, are coming next year, whether ridership levels, transit user demographics, and transit use patterns will return to a pre-pandemic state is a topic of much debate. It is likely that public transit use will change significantly in the future depending on the re-opening of the economy and the state of the health crisis.

The available data tables also did not allow for more in-depth analysis using disaggregated race-based and other social data. However, use of Census data for the Toronto CMA permitted an analysis of public transit commute durations by racialized status.

Many thanks to Keisha St. Louis-McBurnie, Riju Samuel, Leah Nicholson, Rachel Kannenberg, and Christina Love for their contributions to this analysis and related transportation research during their student placements and internships with Social Planning Toronto.

2. The analysis was conducted using a Public Use Microdata File of Statistics Canada’s 2016 Census. www150.statcan.gc.ca/n1/en/catalogue/98M0002X ↩