The city of Toronto is home to a large and diverse population speaking more than 200 different languages. According to the 2016 census, over 130,000 individuals living in Toronto are unable to have a conversation in English or French. Toronto residents without official-language skills make up 4.9% of the city’s population.

Talking Access & Equity: A Profile of City of Toronto Residents Who Speak Neither Official Language delves into the demographics of this population, considers policy and program implications and makes recommendations to support the social, cultural and economic inclusion of these residents. It is the third report in Social Planning Toronto’s census research series.

Despite the many benefits of recreation in health and in settlement, newcomer youth have much lower participation rates compared to their peers. On Monday, June 12, 2017, more than 120 young people, service providers, volunteers, and elected officials gathered at Toronto City Hall to explore ways to improve access to recreation for newcomer youth. Below is a summary of the afternoon and themes that emerged.

Across Ontario, grade 8 students are required to register for high school courses which are classified into three levels: academic, applied, and locally developed/essentials. Typically, students take the majority of their courses at the same level, constituting a stream or pathway. Not only do these decisions impact students’ educational pathways through high school, they can have significant bearing on their post-secondary and career options.

While our education system strives to level the playing field for marginalized students, children of colour and lower income students are over-represented in lower streams which can limit their future opportunities and may not reflect their goals or potential. 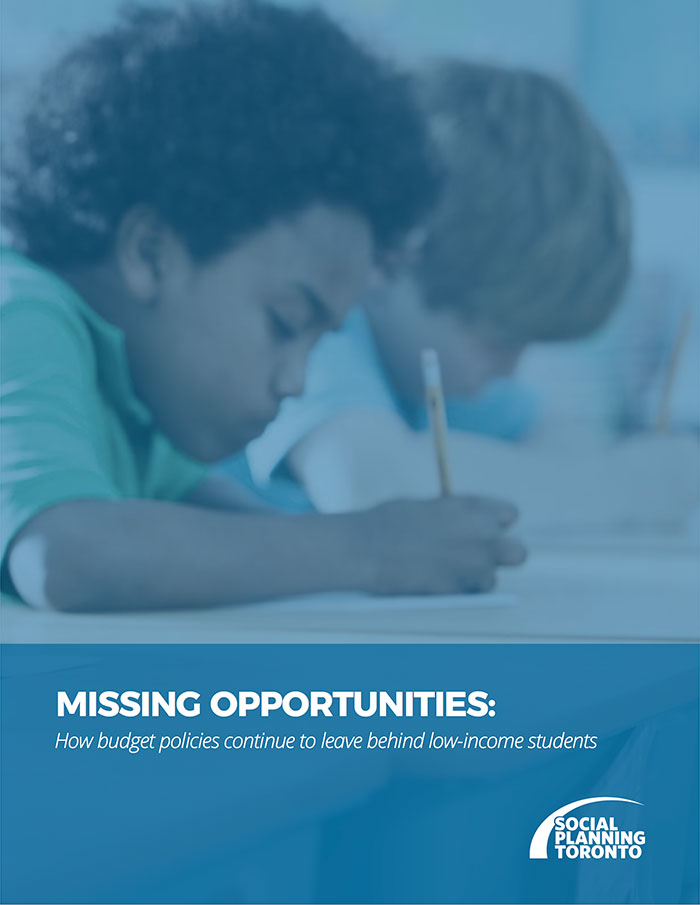 Family income is one of the most powerful factors affecting student success. Students from economically and socially marginalized conditions face greater external challenges and consequently require the system to adapt to meet their needs. In recognition of this, the Ontario Ministry of Education provides all school boards with the Learning Opportunities Grant of which the largest portion is flowed through the Demographic Allocation (LOG-DA). Toronto remains the child poverty capital of Canada and yet the Toronto District School Board (TDSB) only spends about half of the LOG-DA on programs and supports for students living in poverty, according to data they published earlier this year.

The LOG-DA is intended to finance programs such as breakfast programs, homework clubs, reading recovery, and one-on-one support within the classroom, all of which help to level the playing field for marginalized students. However, because of chronic underfunding of the education system by the Province, the Toronto District School Board, like other school boards in Ontario, uses the LOG-DA to balance budget lines not related to the grant’s purpose. This means that the students with the greatest need are failing to benefit from the resources that they are entitled to – about $61 million worth of resources each year. 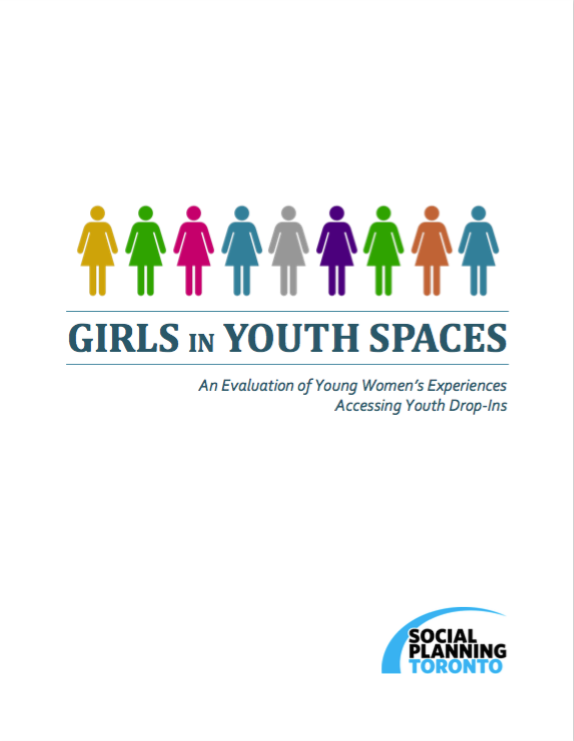 Next week high school will officially let out for summer vacation and many students will find themselves with a considerable amount of free time. How they spend this time, and whether they have adult supervision and productive outlets, will play an important role in determining their outcomes.

In the past two years the City of Toronto introduced seven enhanced youth spaces and will be opening three more this year. These spaces, which emerged as the result of community outcry, are founded on three pillars: dedicated space, dedicated staff, and responsive programming. 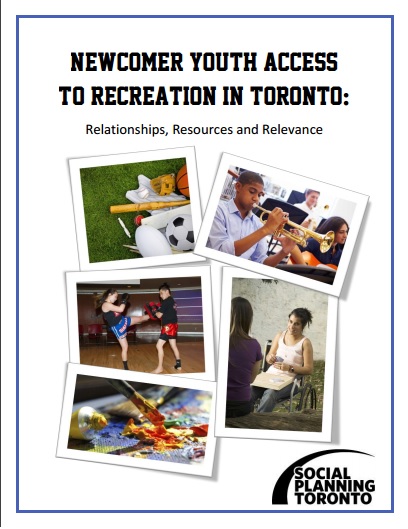 Toronto is one of North America’s most multicultural urban centres and is home to over 65,000 newcomer youth. The settlement process can be a particularly stressful experience for youth who are already making the important transition from childhood to young adulthood. Newcomer youth in Toronto face additional challenges as most live in low-income households, do not speak English as their first language, and are members of racialized groups. Recreation is an important tool in supporting the healthy development of youth and the successful settlement of newcomer youth into Canadian society.

Lost in the Shuffle: In Support of Children in Transition – Parent Resource Manual and Workshop 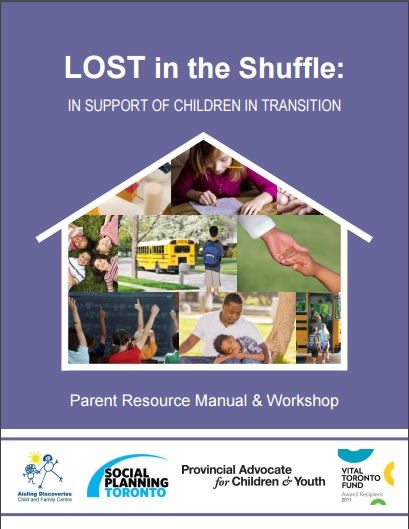 Lost in the Shuffle: In Support of Children in Transition is a resource manual and a workshop guide that aims to build a greater understanding of the barriers children living in shelters face in their attempts to be successful in school and provides strategies for school and shelter staff to assist children. The workshop explores the underlying context of the lives of many of the children who live in shelters.

The purpose of the resource manual and workshop guide is to:

Lost in the Shuffle: In Support of Children in Transition – Staff Resource Manual and Workshop 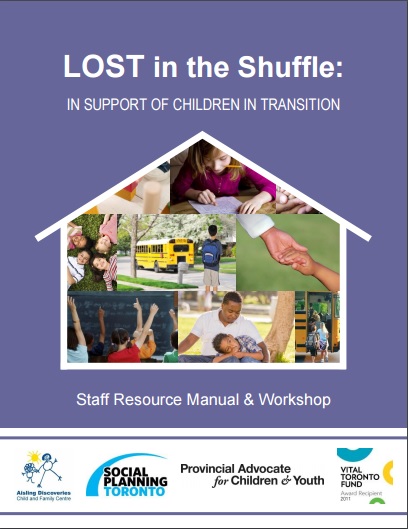 Lost in the Shuffle: In Support of Children in Transition is both a resource manual and a workshop guide The workshop guide involves the use of case studies, video, discussion and storytelling to help staff build awareness, develop strategies and share practices that will help children who are dealing with a great number of stresses. The resource manual includes workshop guide materials but also contains additional information that examines the factors underlying the state in which these children find themselves and shares information about the school and shelter context to help staff have a better understanding of relevant policies from each other’s work environment.

A Triple Threat to Equity- Changing Priorities for Toronto Schools 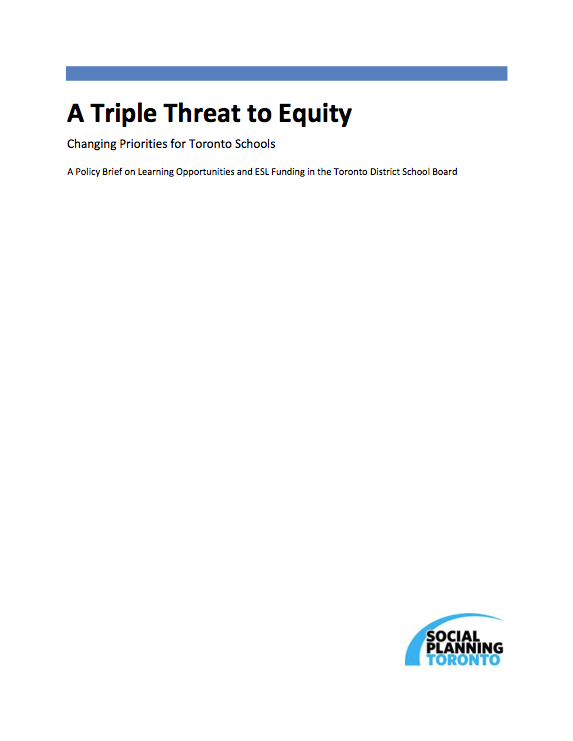 The Toronto District School Board (TDSB) is the largest school board in Canada and has a total operating budget of approximately $2.8 billion. The Ministry of Education provides funding based on student enrolment and the unique needs of each school board. 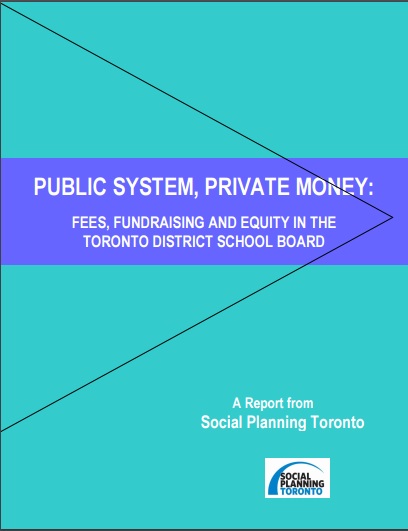