Have Your Mayor and Councillor Committed to Taking Action on the Issues that Matter to You?

In the lead-up to Toronto’s municipal election, community groups and coalitions asked candidates for Mayor and Council to commit to actions around poverty, housing, road safety, and ranked ballots.

On October 22, Toronto elected its new City Council. Social Planning Toronto has produced this election update to show which members of the new Toronto City Council supported these progressive campaigns to make Toronto more liveable and its elections more fair. 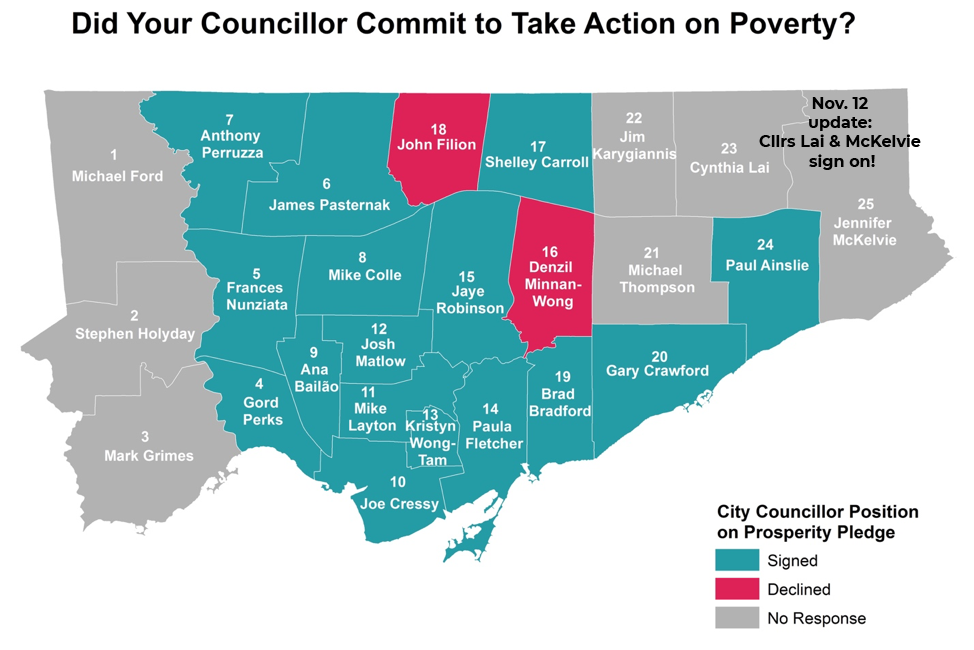 Social Planning Toronto worked with partners Commitment TO Community and Faith in the City on the Prosperity Platform campaign, which asked mayoral and council candidates to sign the “Prosperity Pledge,” committing to fully fund and implement the City’s poverty reduction strategy (unanimously adopted by the previous Council in 2015). Read the full text of the pledge below.

Update (November 12): City Councillors Cynthia Lai and Jennifer McKelvie have recently endorsed the Prosperity Pledge, bringing the total number of Council members including Mayor Tory who have signed it up to 19 (73.1% of Council members). Two declined, and five did not respond to the invitation. 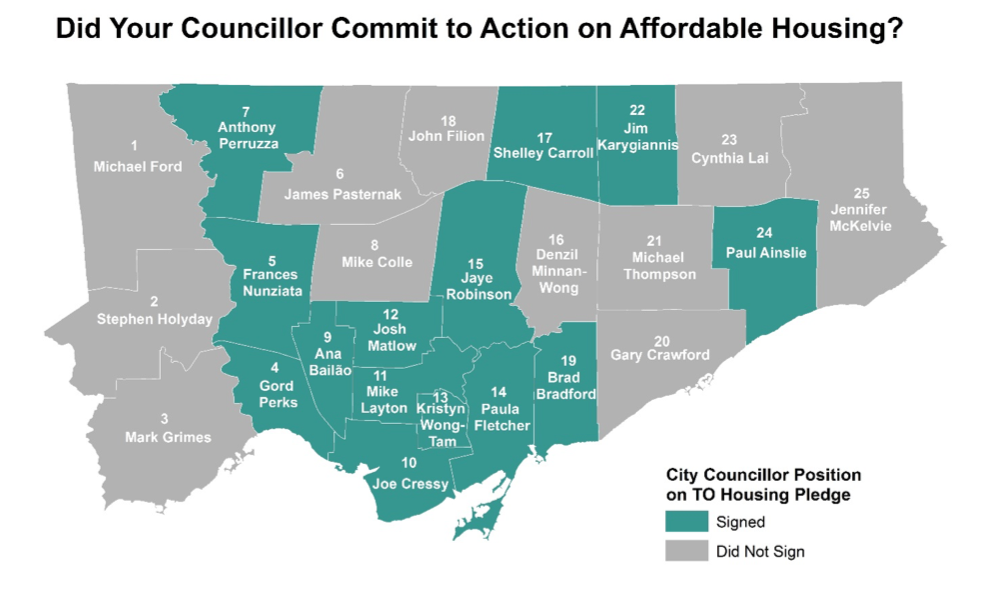 Over 60 community groups and organizations came together to create the TO Housing Pledge, which asked all Mayor and Councillor candidates to show their support for a fair and equitable city where everyone has a place to call home by signing onto the affordable housing pledge. Read the full text of the pledge below. 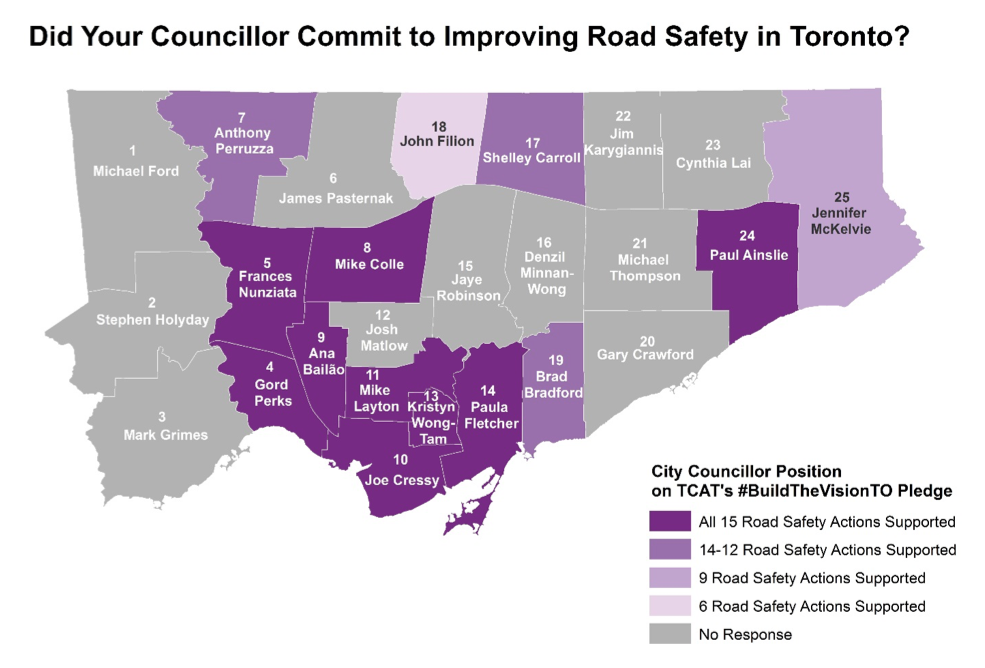 The #BuildTheVisionTO campaign by Toronto Centre for Active Transportation and partners 8 80 Cities, Cycle Toronto, Friends and Families for Safe Streets, and Walk Toronto surveyed all mayoral and council candidates to gauge their support for 15 priorities for building safe and active streets for all. Read the full text of the survey below.

Nine City Councillors supported all 15 road safety actions, three supported between 12 and 14, one supported nine, and one supported six. Mayor Tory described his position on the 15 priority areas but did not specifically endorse any. 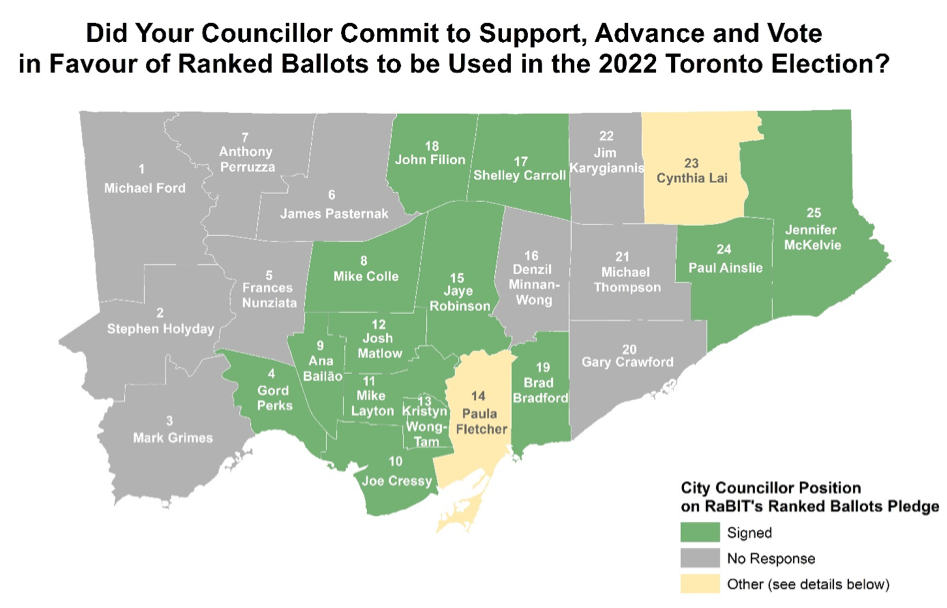 The Ranked Ballot Initiative of Toronto (RaBIT) asked all candidates for mayor and for city council to pledge to support, advance, and vote in favour of using ranked ballots in the 2022 Toronto election.

RaBIT proposes to replace our First-Past-the-Post voting system with a ranked ballot system. Unlike our current voting system, ranked ballots would ensure that the candidate who wins an election is actually the one who has the most support from the electorate.

For example, in the 2018 Toronto election, 17 City Councillors (almost two-thirds of elected candidates) received less than 50% of the votes cast in their ward. In one ward, a candidate won by receiving only 27% of the vote. That wouldn’t be enough under a ranked ballot system. Read more about ranked ballots below.

Fourteen members of Council including Mayor Tory (53.8%) took RaBIT’s Candidate Pledge. Ten City Councillors did not respond to the invitation. The position of the remaining two Councillors is best categorized as “Other.”

Specifically, Councillor Paula Fletcher declined to take the pledge but publicly called for “a full examination of electoral reform and governance reforms that will improve civic engagement, including ranked ballot and full proportional representation, and voting methods from other cities. This needs to be a wide-ranging, robust study undertaken by the City.”

Second, due to an error on RaBIT’s part, Councillor Cynthia Lai may not have directly received an invitation to take the pledge. RaBIT will follow-up with her, but as of publication, she has not taken the pledge.

All four campaigns received support from a majority of Toronto City Council members. Now it’s time for our elected leaders to deliver on their promises to make Toronto more liveable and our next election more fair. Community members will be holding the new council accountable for their commitments to Toronto residents. 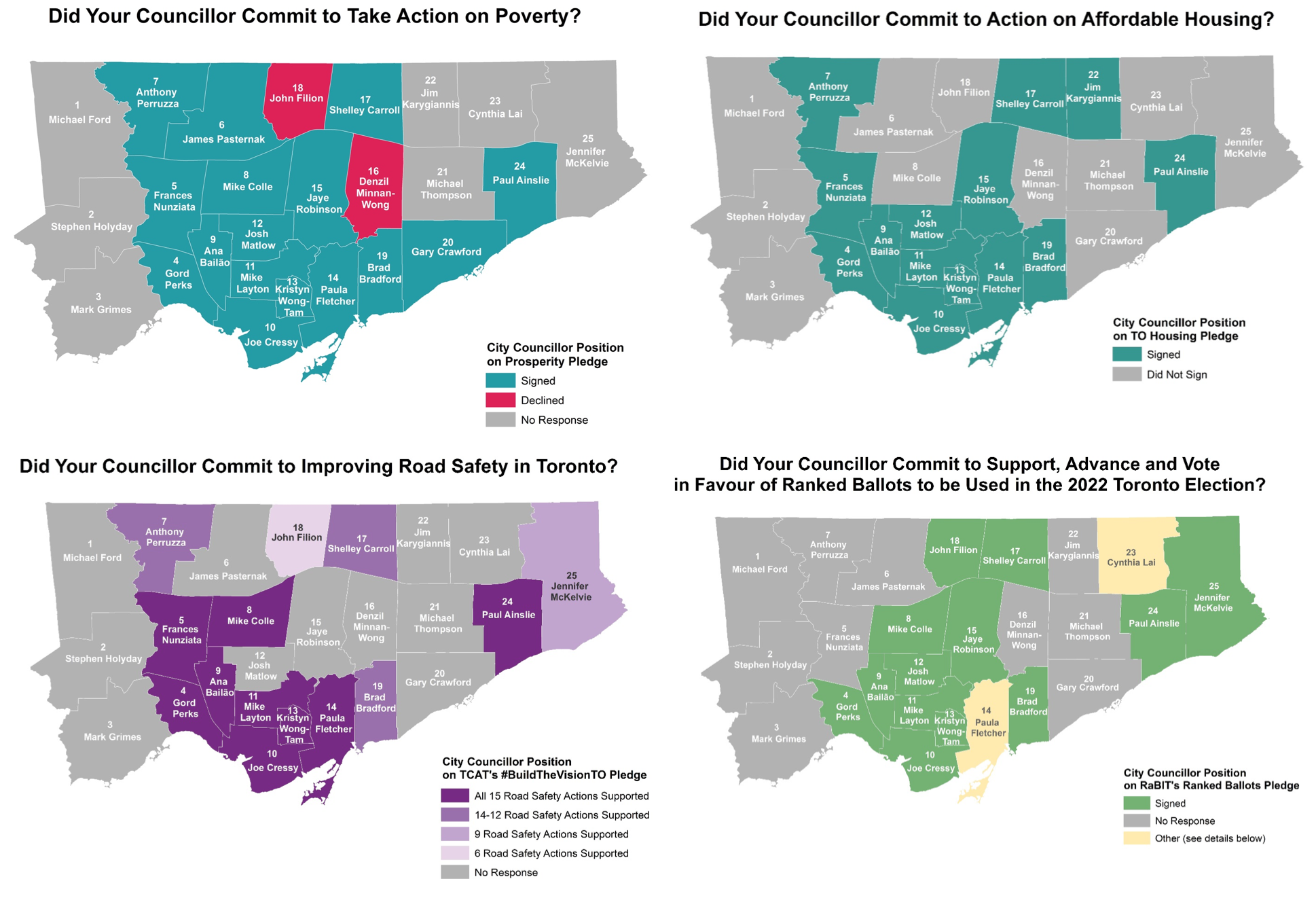 We’re asking all Mayor and Council Candidates to sign the following pledge:

I PLEDGE, if elected to Toronto Council, to work with community, business and faith leaders to reduce poverty and inequality in Toronto, and to support the full funding and full implementation of Toronto’s Poverty Reduction Strategy (TO Prosperity) and other Council-approved equity initiatives over the 2019–2022 term, including the following approved actions:

Half of Toronto renters are spending more than 30% of their incomes on housing. Young people are being forced out of the city, newcomers can’t find a foothold, and homelessness has never been greater. It’s a crisis that affects us all: women and families unable to find a safe and lasting home, closed doors for Indigenous, racialized and LGBTQ2SIA people, and unsuitable conditions for people with disabilities.

Housing is a fundamental human right. We are seeking your pledge for this next term of Council: to take five practical steps towards making Toronto a fairer and more equitable city for all.

Each question was accompanied by a short paragraph that provided context, facts and details regarding the issue. Click here and here for the full questions and candidate responses.

Q1 – Do you commit to supporting the implementation of a city-wide default speed limit of 30 km/h on all residential streets and 40 km/h on all arterial and collector roads?

Q2 – Do you commit to supporting the streamlining of the traffic calming process?

Q3 – Do you commit to supporting the implementation of traffic calming at all elementary school zones by 2022?

Q4 – Do you commit to supporting adding a sidewalk on at least one side of the street when an opportunity such as road reconstruction arises, in line with City policy?

Q5 – Do you commit to supporting a minimum 2.1 metre pedestrian clearway for sidewalks on all arterial and collector roads?

Q6 – Do you commit to supporting building protected bike lanes on main streets, including the major corridors identified in The Cycling Network Plan?

Q8 – Do you commit to supporting accelerating the Cycling Network Plan to be built in the next four years?

Q9 – Do you commit to supporting increasing the use of automated traffic enforcement safety cameras?

Q10 – Do you commit to supporting prioritizing the safety of vulnerable road users by outlawing motor vehicle right turns on red?

Q11 – Do you commit to supporting a controlled crossing at all bus and streetcar stops?

Q12 – Do you commit to supporting an implementation strategy for Toronto’s Complete Streets guidelines?

Q13 – Do you commit to supporting the Transform Yonge option for Yonge Street between Sheppard and Finch Avenues?

Q14 – Do you commit to supporting increasing the City of Toronto’s budget for achieving zero traffic deaths to $107M/year, which would bring it to the same per-capita level as New York City’s Vision Zero Action Plan, considered a leader in North America?

Q15 – Do you commit to supporting and funding a monthly Open Streets Toronto program from May to September in 2019 and beyond?

As a candidate in the 2018 Toronto election, I pledge that, if elected, I will support, advance, and vote in favour of those actions required for ranked ballots to be used in the 2022 Toronto elections.

Ranked ballots allow voters to choose multiple candidates, ranked in order of preference. It's easy as 1, 2, 3.

On Election Day all of the first-choice votes are added up (just as we do with our current system). If someone wins 50% or more of the vote, they are declared the winner and the election is over. However, if no one receives more than 50%, the candidate with the least votes is eliminated from the race.

In a conventional runoff, a second round of voting would take place at this point and all the supporters of the eliminated candidate would vote for their second choice.

With ranked ballots, there is no need for costly multi-round voting because voters have already marked their second choice. If your preferred candidate is eliminated from the race, your vote is automatically transferred to your second choice. Again, all the votes are counted (first choice for candidates still in contention and second choice votes transferred from eliminated candidates), and if someone has a majority they are declared the winner. If not, another candidate is eliminated, and this process repeats until there is a majority winner.