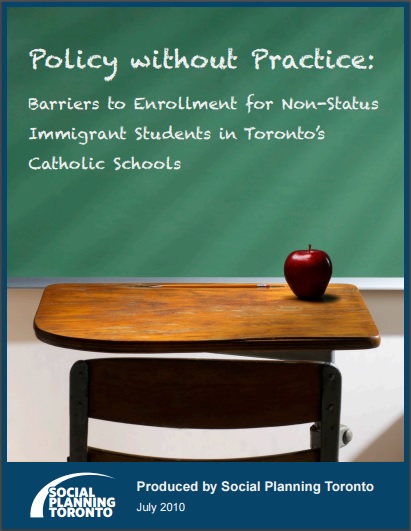 This research project is a follow-up to Social Planning Toronto’s 2008 report entitled, “The Right to Learn: Access to Public Education for Non-Status Immigrants”, which documented the experiences and barriers that non-status residents were facing in enrolling their children into Toronto’s public schools. This report was distributed to all trustees from both the Toronto District School Board (TDSB) and the Toronto Catholic District School Board (TCDSB). In the report we found that despite a clear provincial law (Ontario Education Act) which states no child shall be denied admission to an Ontario public school, even if they or their parents lack immigration status, some families had in fact been denied access, were unaware of their rights, or faced obstacles during the registration process. As well, parents raised issues concerning their child’s safety while attending school and feeling the need to “stay under the radar”, which impacted both parent and child involvement in school activities.